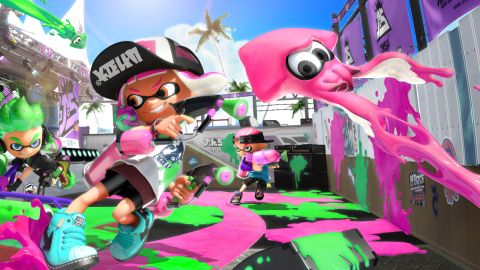 Splatoon 2’s formula no longer feels original, but it looks great, its controls are tight, and there’s enough variety to give you dozens of hours of multiplayer fun.

I never thought a game about chucking purple and green paint at little cartoon men would have me sweating. As in, physically sweating. I’m bent over my Switch, hammering the buttons like my life depends on it. And it does, in a way. There are two guys tracking me down – one with Splat Dualies (think sub-machine guns), and one with a scary Splatling gun that can rip me apart in seconds.

Fortunately, I’ve just got my special attack, and I trigger it as they descend on me. I mash SR to fire sliding paint bombs, sending the two enemies squirming into squid form to try and get out of the way. But it’s too late. They’re caught in the blast, plastering the floor with gloop. I can finally relax – but only for a second, because there’s a character with a giant paint roller making a beeline for me.

Splatoon 2, like its predecessor, is a frantic, deceptively deep multiplayer game hiding under a veneer of bright lights and funky sounds. Here are the basics: you fire your gun to lay paint on the ground, trying to cover as much as the map as possible with your team’s colour.

When you see someone from the other team, you juke, duck and fire. Hit them enough times and they’ll explode, spraying the map with paint, and taking them out of the action for a few valuable seconds, during which you can layer over their paint with your own. At the end of the three-minute round the team that has covered the largest portion of the map wins.

It’s a simple formula, and in reducing the number of moving parts Nintendo has been able to nail every single element. The balance between spraying like a madman and conserving paint is ever-present, and never lets you get comfortable. Flipping between squid form – which allows you to slide quickly around in your own paint – and human form is as slick as it should be, and the controls are precise. The special attacks are suitably over-the-top. And zooming through the air from spawn to a teammate in one click of a button means that you’re never out of the action for too long.

The presentation is sublime, all bright colours, crisp lines and shiny special effects. Plus, it sounds great, and the joy is in the details. Running on metal grates creates a distinctive clink-clank, and paint sounds different when it splats on different surfaces. When you’re waiting for a game to load, each button creates a different musical sound, and you can adjust the pitch and speed with the control sticks, almost like a DJ mini game.

There’s a massive amount of variety within its main game mode (you unlock more later on, which I’ll touch on in a sec). Each gun – you’ll get one at every level up – is distinct. If you just want to lay down loads of paint, pick the Carbon Roller, which increases your speed the more time you have it deployed. If you want to focus on frags, pick the Splat Charger, a colourful sniper rifle.

And the ever-rotating map pool adds more variety. When you play Port Mackerel, a flat, narrow arena, there’s a defined front line, and you cautiously try to push the enemy back. But jump into the vertical, slanted Moray Towers and you can easily get behind the enemy, inking the area around their spawn while they’re distracted in the middle of the map.

I like how the game doesn’t hold your hand. Instead, you get better by trial and error, and by watching others. I’ve learnt that if I lie in wait in squid form when I spot an unsuspecting enemy heading my way, I can spring up and net an easy kill. I know that if I stick with my teammates, we can cover areas a lot quicker, and hunt down individual enemies.

These tactics become more important in the game’s other modes. For your first ten levels of ranking up (around three to four hours), you’ll be playing Splatoon’s landmark game mode, Turf Wars. When you reach level 10, you unlock two more modes: Tower Control, where you climb a tower and push it towards the other team’s spawn area, and Splat Zones – think King of the Hill with more ink.

I enjoyed both. They feel even more frantic because the action is centred on a single point, and they require more coordination. There are league battles too for when you reach a certain rank, which should be the ultimate test of your skills (sadly I didn’t get access to it in my review copy).

And that’s not even to mention the single player mode. I didn’t care for the plot and the enemies could use more variety, but it’s an ideal showcase of the game mechanics. And it’s more than just a tutorial for multiplayer: there’s loads of stuff to blast through, and the platforming is particularly substantial.

I’m gushing, and rightly so, because Splatoon 2 is simply very, very good. But it’s not perfect. My main complaint is just how similar it is to the original. This is basically an updated Splatoon with one extra game mode – a fun, co-op horde mode with seven different bosses – and some new guns and maps. I would’ve liked to see the formula change more.

There are also missteps outside of the game modes themselves, in the menus and matchmaking system. Once you’ve started searching for a game, for example, there’s no way to stop: you have to see out the full two and half minute timer whether you get enough players or not. Now, this shouldn’t be as much of an issue when the game is fully out and there’s lots of people wanting to play. But still, it’s grating. And you also can’t change your loadout while waiting for a game, which is a bizarre choice.

Will Splatoon 2 make the list of the best games on Nintendo Switch?

The game encourages you to customise your character with new clothes, each of which gives you bonus abilities. I enjoyed playing around with different looks, settling on a cap that boosted the charge speed of my special attack and some trainers that made me run faster. All well and good, except for the fact that hats are in a different shop to shoes, which are separate from tops and legwear. Again, you have to quit to the menu every time, then go to a different store.

If these gripes appear minor, that’s because they are. They came nowhere near ruining my time with Splatoon 2. It’s the most multiplayer fun I’ve had in a while: the bright colours and squelchy sounds draw you into a mechanically complex shooter that you could spend weeks trying to master – and still learn new tricks. Splatoon 2 doesn’t improve much on the excellent original, but it’s a timely reminder of just how fun it is to throw a bucket of paint at a man with a pointy head until he explodes.

Splatoon 2’s formula no longer feels original, but it looks great, its controls are tight, and there’s enough variety to give you dozens of hours of multiplayer fun.