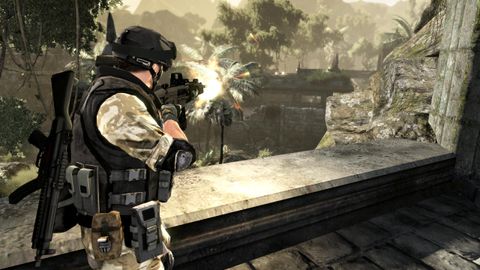 For the past decade, the SOCOM series has defined “hardcore” on PlayStation platforms, nurturing a growing, devoted (and somewhat masochistic) fanbase that has closely followed the series on PS2 and PSP. Now, with original developer Zipper finally back at the helm, SOCOM 4 appears to be angling for a wider audience, adding Move support and a story-driven, character-focused campaign to supplement its blink-and-you’re-dead multiplayer skirmishes. And while that’s admirable, it maybe should have stuck with the skirmishes.

Like most other games in the franchise, SOCOM 4 is a third-person tactical shooter – shorthand for “you have a squad to order around, and a couple of well-aimed shots can kill you.” Centering on Operations Commander Cullen Gray (who’srarely referred to as anything other than “OpsComm”), SOCOM 4’s campaign focuses on a small squad of elite NATO troops who find themselves cut off from nearly all support during an insurrection in a small Southeast Asian country. After teaming up with two South Korean stealth operatives, OpsComm decides on the only sane course of action: finish NATO’s mission by almost single-handedly putting down the insurgency and arresting its leader.

It gets a little more complicated than that, and the game tries to inject some drama by creating friction between OpsComm and the Koreans’ female officer, Lt. Park (usually referred to as “Forty-Five”) over the suicidal nature of their mission. In the end, though, none of it really matters; the characters, conversations and story twists are thinly developed, forgettable and peppered with occasional laugh-out-loud clichés (“You and I are very much alike, Commander,” seriously?). Of course, nobody really plays SOCOM for the story, but if the aim here was to draw in more casual fans with a deeper plot, it would have been nice to see Zipper put forth more effort to make it interesting.

Above: That said, the unlimited ammo-resupply crates - like the one at left - are awelcome touch

The decidedly “meh” story would also have been more forgivable if it had been backed up by some seriously blistering action, but while SOCOM 4 brings the firefights, it doesn’t do a whole lot to make them feel distinct. There are a few standout set-pieces –guarding your hacker squadmate from waves of goons before sinking distant ships with the rockets he’s hijacked is a definite highlight, as is taking down armored vehicles with airstrikes and RPGs. The game isstingy with these moments, however, and in the main, this is standard shooter fare. Each linear level tends to revolve around repeatedly sneaking into position, taking cover (with a somewhat unreliable sticky-cover mechanic) and then starting a gunfight – which, in turn, means grinding through interchangeable enemies with upgradable firearms until your squadmates give the all-clear. Then it’s off to the next group of hapless guards.

Things are a little more interesting if you learn to order your squad around effectively (although if you leave them to their own devices, they’ll still follow you and attack whatever you’re shooting at). Your four squadmates are divided into Blue team (heavy weapons) and Gold team (quiet snipers), and ordering them around is as simple as aiming at a patch of ground (or cover point, or enemy), andtapping the direction on the d-pad that corresponds to one of the teams. By holding down the d-pad, it’s also possible to give them a delayed order that they’ll only execute when you give a separate signal.This is useful for ordering both teams to, say, attack separate targets or move to separateareasat the same time.

When it works right, this can be awfully damn rewarding, making you feel like some kind of badass tactical genius. And even if you aren’t setting up an elaborate ambush, it's pretty useful tobe able to assign a team to guard the area behind you, or to silently take down a sentry. The problem is that it doesn’t always work. For example, if you want your team to move to a piece of cover in the distance, you’d better make sure you’re aiming precisely at that cover point, or you might accidentally order them out into the open. Likewise, if you try to tell your squadmates to focus their fire on a specific target during a firefight, don’t be surprised if they go dashing into the enemy’s line of firebefore you can call them back.

It’s not always your fault, however; you might try to order Gold team to sneak up to a high vantage point to silently snipe some guards, only to cringe as they crouch-walk into full view of the enemy on the way. At that point, using them as a distraction while you (still hidden) flank the guards might seem like a good strategy, but no - once the guards know where one of you is, they know where you all are, and they tend to prefer shooting at you to shooting your squadmates. Granted, you could have avoided the situation by laying out a short path for Gold team using multiple waypoints and a delayed command, but having to babysit squadmates to that degreeisn't a great selling point for a tactical shooter.

As shaky as your partners’ intelligence is, your enemies are arguably worse. Sometimes, they’ll take cover and try to stick together, but it’s more common for them to run out into the open and take potshots until you shred them with machinegun fire. That isn’t to say they aren’t tough, or that they don’t present a challenge – they are and they do, and given how low your bullet tolerance is, even the stupidest enemy can kill you quickly. But in a game that wears “tactics” on its sleeve, it’s disappointing to see the bad guys acting like paper targets.

AI becomes less of a concern during SOCOM 4’s stealth missions, however. Here, your perspective switches to Lt. Park as she sneaks, alone, into enemy strongholds at night to commit acts of pre-battle sabotage. Coming complete with a Sam Fisher-style light meter that tells you how hidden she is, these segments encourage you to stay hidden in shadows and underbrush, using thrown bullet casings or – in a pinch – stealth kills (which create bodies you then have to hide) to keep enemies off your trail.

The stealth bits are a fun change of pace from normal gameplay, although they tend to be even more linear, and – despite frequently ending in automatic mission failure if you’re seen –aren’t really challenging once you’ve memorized where the guards are. At least not until the final stealth level, an unforgiving run through a well-lit, multi-objective camp filled with soldiers who’ll all know exactly what and where you are the second you slip up. That one might take a few tries.

Once you're done with the story, SOCOM 4 has a "custom" mission feature to keep you interested - but don't get too excited. Essentially an offline version of the co-op missions (more on those shortly), custom missions can be set up on six different maps, with variable enemy density and two possible game types: Takedown, which involves finding and killing an enemy commander, and Espionage, which tasksyou with finding enemy intel. While these extend the game's length, their dry, randomly generated nature and totallack of checkpointsdon't do much tomake it more interesting.

At this point, SOCOM fans might argue that the campaign isn’t really the point, and that the real reason anyone plays SOCOM is for multiplayer. They’re right, of course: the campaign is a Trojan horse to get this into gamers’ hands, but the real draw is online play. Developed with input from some of the SOCOM II diehards who hung on until the PS2 servers were shut down, SOCOM 4’s competitive multiplayer is pretty compelling. It’s not for everyone – if dying quickly and often sounds frustrating, youmay want toavoid it – but those with the right balance of sneakiness and quick reflexes will feel right at home.

Spread across nine huge maps, SOCOM 4 has four basic, competitive game types (with more available as custom types)to pick from: Suppression (team deathmatch), Uplink (Capture the Flag with an intel-stealing conceit), Last Defense (a control-points variant in which capturing every point reveals the enemy base, which can then be bombed) and Bomb Squad. Bomb Squad’s a new mode, and so far it’s been the most interesting of the four. A twist on “protect the VIP” matches, it tasks one team with escorting a bomb tech – a randomly chosen player who gets outfitted with extra-thick blast armor – to several huge timebombs, which the other team has to defend.

While online features the same regenerating health and cover system as the campaign, it’s possible to turn those off when setting up a match, along with the ability to respawn, which is eliminated entirely if you decide to activate “Classic” mode. It’s great to have the option there if you find yourself pining for the balls-hard, PS2-era SOCOM, but be warned: having to sit through a lengthy match as a spectator after you’ve caught a bullet early on isn’t much fun, especially in Classic Uplink, which lasts for multiple rounds.

If you like your multiplayer a little less hectic, SOCOM 4 introduces a five-player co-op mode that – while not quite as fun as the campaign would have been with live human squadmates – is still pretty enjoyable.An online version of the custom missions, co-op games span the same six mapsandtwo game types, and feature roughly the same bland action. Somehow, though, the presence of friends – who, unlike your AI squadmates, will actually heal you and toss smoke grenades to make getting around easier – makesthe experience immeasurablymore fun.

Online or offline, SOCOM 4 supports two features Sony’s been pushing hard lately: 3D and Move support. In 3D, SOCOM 4 looks great, maintaining its high level of visual clarity while adding depth to the action. It isn’t a game-changer, but it’s a nice bonus if you’ve already got a 3D TV. Meanwhile, Move allows for a little more accuracy, but unless you've been using it to play Killzone 3 for a while, it'll take some getting used to before it feels as natural as a controller.

That goes double if you decide to slap your Move controllers into Sony’s heavily advertised Sharp Shooter rifle. While the Sharp Shooter’s an exceptionallyslick piece of hardware, using it to point the Move wand at the screen actuallytakes away some of the pinpoint accuracy that minute wrist movements make possible. And in all honesty, holding up a plastic rifle to make a little reticule move around onscreen was tiring and frustrating enough to make us long for a regular controller after only a few minutes.

As flawed as SOCOM 4’s campaign is,it’s never quite enough to make it a bad game. Sometimes, it’s even a lot of fun, and its excellent music and high level of visual polish are hard to ignore. Most of the time, though, it just sort of is, existing as a weirdly generic, blandly acceptablecompromise between casual and hardcore that doesn’t really go far enough to please either set of fans.That statement doesn't apply to the multiplayer, however, which is mostly fantastic – and mostly hardcore, with a level of online competition that's tense and unforgiving enough to please longtime fans (and discourage more casual players, at least at first). Again,SOCOM 4's multiplayer isn't for everyone – but if you're looking forsomething fast, tough anddemanding,it has a lot to offer.

Mikel Reparaz
After graduating from college in 2000 with a BA in journalism, I worked for five years as a copy editor, page designer and videogame-review columnist at a couple of mid-sized newspapers you've never heard of. My column eventually got me a freelancing gig with GMR magazine, which folded a few months later. I was hired on full-time by GamesRadar in late 2005, and have since been paid actual money to write silly articles about lovable blobs.
See comments
Gaming deals, prizes and latest news