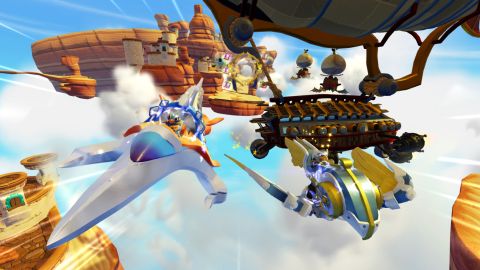 Skylanders Superchargers is a competent sequel, but it lacks some of the charm of its predecessors by focusing too much on its collection of vehicles.

Another year, another new Skylanders gimmick to completely shake up how the mega-popular toys-to-life series plays. In Skylanders Superchargers, the titular plastic warriors take a backseat to a variety of race cars, airplanes, and submarines. While that leads to some interesting gameplay scenarios, this shift in focus detracts from one of the most important things Skylanders has going for it: personality.

That's not to say the vehicles don't look cool. Superchargers is filled with sleek hot rods, futuristic fighter jets, old-timey submersibles, and a whole manner of cartoonishly-designed means of conveyance, and they look just as great in-game as they do in their physical toy form. But vehicles don't emote - there's only so much they can do to portray that same charm that Skylanders' myriad creatures can. And since the vehicles form the backbone of the entire Superchargers experience, that charm seems lacking - especially compared to last year's Trap Team, whose personality literally lept from the screen and into the real world.

The vehicles may be very important to the core experience of Superchargers, but they don't change its basic fundamentals in any significant way. You'll still maneuver the digital representation of the character you've plunked down on the Portal of Power through a gauntlet of enemies, jumping challenges, and light puzzle solving, and you'll wander through an array of gorgeous locales filled with interesting challenges. One level puts you high up in the clouds, as a constant fog obscures your view; another gives you a magical aura that can push and pull objects at will, and its puzzles and enemies require you to make good use this power to defeat them. This is a kid's game, so it's rarely taxing, but Superchargers gets a lot of mileage out of its level design.

Superchargers features a ton of new and returning figures to play with, but the need to collect 'em all has severely diminished. Normally, Skylanders games hide most of their secret treasures behind elemental gates, which essentially require players to purchase a figurine of every element if they want to access everything. In Superchargers, those gates are gone entirely, replaced by land, air, and water-based vehicle challenges. The base set includes a land vehicle, and it's the only one you need to beat the game, but having a vehicle of every type opens up their respective challenges for you, and completing them will provide shortcuts or make boss fights easier to finish. You get a boost to your attack power by matching the Skylander's element with their respective zone in each level, and pairing a Skylander with their respective vehicle will make them even stronger, but combat is so easy on all but the hardest difficulties that there's no reason to switch your Skylanders out unless you really want to. It's a nice change for budget-conscious fans, but it feels strange for a Skylanders game, as it really lessens the sense of discovery that comes from using the right toy in the right situation.

Each new Skylanders game brings with it an array of new toys to buy, but they also allow you to bring your old toys forward into the new game. Superchargers is no exception, but while other games at least provide some reason to dig back into your bullpen (e.g., Giants are the only ones able to open giant treasure chests), last year's traps are the only legacy toys that see any special application here. Stick one of your traps in the special slot on the portal, and you'll get a temporary weapon boost for your vehicle based on the trap's element. This feature is so half-assed that it would probably be better off it it weren't supported at all.

At least the vehicles themselves are (mostly) fun to tool around in. The driving controls are serviceable, and levels often shift between free-form combat arenas filled with ramps, boost pads, and loads of enemies, to on-rails sections to keep things interesting. Flying challenges are easily the best part of the game, combining simplistic yet responsive aerial combat with varied objective types, and it's a shame that they're completely optional. Water levels, however, are the absolute worst. Maneuvering your submersible is sluggish at best, and diving controls change arbitrarily between level types. It's awkward and playing through these challenges is a total chore.

Superchargers also features an entire racing game, completely divorced from the main campaign. You can run the game's numerous vehicles through a variety of land, air, and sea-based tracks, engage in single races or tournaments, and even compete online against friends and strangers. It's actually pretty fun - it's no replacement for a game like Mario Kart, but watching a bunch of cars with their own special powers duke it out on the racetrack is still entertaining. Unfortunately, much of it is locked behind a paywall, as a majority of the tracks are unplayable unless you buy track packs and plunk down the respective trophy figure on the portal - and as of publication, only the sea-based track pack is available for purchase at a pricey $34.99. What could have been an interesting side activity is now a prohibitively expensive diversion, and that's a shame.

Interestingly, the biggest addition to the Skylanders formula isn't the vehicles - it's the online play. Now, you can team up with your friends without having to be in the same room. The experience doesn't change all that much with the addition of a second player, though it is fun to completely wreck house with a buddy in tow. Superchargers does limit online co-op to people you know on your friends list, though, which makes sense considering the target audience. Online races, however, can be played against the wider Skylanders community, though not many people seem to be partaking in it right now, as wait times between matches can last several minutes.

Even with the addition of a long-overdue online feature, though, Skylanders Superchargers' biggest problem is that it lacks the magic found in previous entries. Plunking a car down onto a plastic portal just doesn't have that same euphoric feeling of listening to a freshly-captured monster shout at you through a tiny speaker, of snapping your toys in half to mix and match them together, or of busting out your full roster of figurines to find secret areas you otherwise wouldn't have access to. It's a safe, by-the-numbers sequel that is the very embodiment of 'more Skylanders', and not much more.

Skylanders Superchargers is a competent sequel, but it lacks some of the charm of its predecessors by focusing too much on its collection of vehicles.