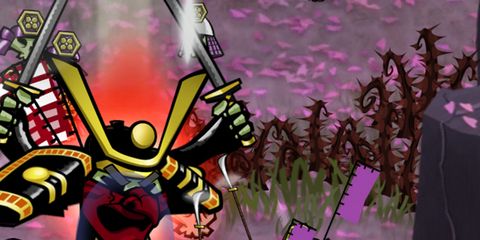 It’s been a long time coming, but Skulls of the Shogun, the debut effort from developer 17-BIT, has finally made its way to the Xbox 360 and other Microsoft devices. Inspired by the studio’s love of classic turn-based strategy titles, SOTS is a streamlined tactics game in the vein of Advance Wars and Fire Emblem. Hardcore fans will no doubt immediately recoil at the word "streamlined," but to dismiss the game on those merits would be doing it a disservice; SOTS offers a deep and engaging strategy experience in a simple-to-grasp form. That said, a few missteps do keep it from reaching quite the same heights as its influences.

The most striking thing about SOTS is its distinct visual style and its humorous dialogue, which make the whole adventure feel refreshingly light. Your avatar, the great feudal warlord General Akamoto, is stabbed in the back just as he’s about to become shogun. He awakens on the Shores of the Dead, upset that the gatekeepers of the afterlife have refused to acknowledge his rank and let him cut to the head of the line. To rectify this, he vows to take the afterlife by force and become the Shogun of the Dead himself, amassing a small army of dead followers as he journeys through each of its four seasons. Of course, it’s not as easy as it sounds, and he soon learns that an imposter has assumed his name and is commanding the other deceased generals to put a stop to his advances.

The story bristles with an irreverent humor, but it’s SOTS’s gameplay that really makes it a compelling experience. Unlike Advance Wars, which serves as the game’s biggest influence, SOTS offers fans a stripped-down take on the genre’s conventions. The title eschews the grid-based combat of other tactics games for a simpler and more tactile approach to unit management. You’re free to guide your characters anywhere within their movement radius, which forces you to really consider your surroundings, as how you use the environment could be the difference between success and failure. Positioning a unit in a tangle of bamboo gives it a slight boost in evasiveness, while troops that are left on an outcropping are susceptible to being knocked off to their immediate deaths. Despite the stripped down interface, there is still a satisfying layer of depth to unit management in SOTS.

There’s also a wealth of options at your disposal thanks to the number of different actions you can perform. Aside from attacking enemy forces, you can deploy your soldiers to capture (or “haunt”) certain parts of the terrain and amass resources; haunting a rice paddy, for example, will bestow you with a set amount of rice per turn, which can then be used to create more troops at one of the summoning shrines located on the map. To top that off, you’re limited to five orders per round, forcing you to prioritize each move you make. Do you attack the nearest enemy to whittle away his health, or do you eat the fallen skull next to him to boost your own? Do you capture another rice paddy, or do you use this turn to conjure up a new unit? The simplified interface belies just how deep SOTS’s gameplay actually is, and it feels very rewarding to take all of these different factors into account and plot out a successful strategy.

Unfortunately, there are a few issues that hinder the game’s lasting appeal. The campaign in particular suffers from a lack of variety. The title does a nice job of introducing new wrinkles to the gameplay with each successive battle, but you’ll still be facing off against the same enemy types for the entirety of your quest, making it monotonous in the long run. Your stats also don’t carry over between missions, so there’s very little sense of progress in the story.

Fortunately, the multiplayer mode helps add some longevity to the game. The mechanics lend themselves very well to competitive play, and besting another human feels much more satisfying than outsmarting the AI because they’re far more cunning (and the maps aren’t skewed in your opponent’s favor as they are in the campaign). And thanks to the game’s unique asynchronous multiplayer, you can compete against players on any other Windows device, deploying your soldiers whenever you have the chance a la Words with Friends.

Despite its few flaws, SOTS is still a fun take on the strategy genre, and definitely worth a look if you have a penchant for tactics games. The stripped down interface makes unit management much more immediate, and the nuanced gameplay, thanks to range of choices at hand, is simple to learn and satisfying to master. The campaign is on the monotonous side, but the engaging multiplayer mode, which lets you compete with players on any other Microsoft device, ensures that you’ll always have someone to play against.

This was reviewed on the Xbox 360.