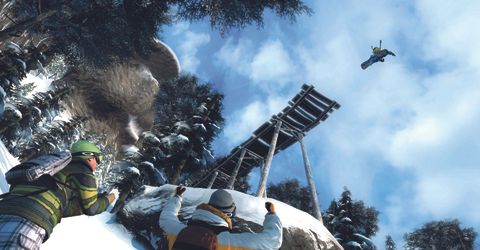 EA’s SKATE succeeds by focusing on ultra-realistic, simple thrills – so even a kickflip feels like an achievement. By contrast, SSX thrives on reality-bending absurdity, layering impossible tricks with riotous color and complex trick lines. Shaun White Snowboarding, meanwhile, aims somewhere in between – with typically middle-of-the-road results. Despite using the Assassin’s Creed engine, Damascus’ lush spires are replaced by duller-than-reality swathes of white. Snowboarding’s appeal lies in the beauty of the open mountain, but Ubisoft’s effort looks dull and flat. It’s nice enough on the top slopes, but desperately monotone lower down and – in our eyes – not even a match for five-year-old SSX3 on PS2.

Controls are pitched somewhere between SSX’s arcade theatrics and the realism of Amped, with a body part-specific board-grabbing system that tips its hat to SKATE. The left stick controls your custom boarder’s body, leaning left or right to carve into the slope, pushing forward for speed or back for a scraping stop. The right stick controls the legs, angling the board or switching your leading foot. The right trigger controls your knees, bending them as you hold it in and for a jump when you let go. You can also hop off your board and go hunting hidden areas and objects if you get bored, or even lob snowballs at folk if you like. The trick system’s accessible and offers depth – but it’s never as bombastic, or demanding, as you’d hope. The high-scoring combos demanded by later events will prove a challenge, but lack SKATE’s freedom and intuition, or SSX’s wild lines.

Career progression is initially baffling – you’re left free to go anywhere searching for giant luminous coins (no joke) but despite the instant event retry option, chopper lifts up the slopes, and immediate around the world transport, you can’t quick-skip to objectives on the map like Skate – resulting in time-sapping downhill carves looking for event markers. Maybe the Burnout-style persistent online multiplayer will add extra edge, but offline it’s solid at best. It’s painfully slow, too, so you need to push forward at all times to generate any momentum. As scraping down flat, grey mountains to The Ting Tings pulling vaguely rewarding tricks goes, this neither delights nor offends.