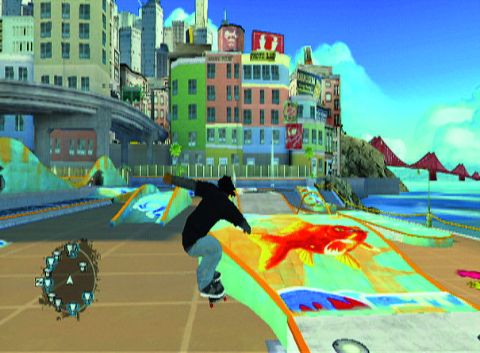 Get the tissues ready, because this is a semi-tragedy. Shaun White Skateboarding is a partly a bad game, but it’s painfully close to being a good one. The fatal flaw is one option. One mystifyingly absent option. Controlling your skater can be done with the balance board or a Wii remote and Nunchuk combo, and most sane gamers are likely to plump for the latter. Movement’s handled by the analogue stick (so far so good) and grinding is dependent on twisting the point of the remote, which works well enough. But jumping is mapped to an upwards flick of your wrist, and stunts depend on you to tilt the remote at the same time. It’s a city-sized disaster.

It’s not that it’s unresponsive – it’s just you need to jump and do stunts all the damn time. The levels are large open areas filled with grinds, half pipes and stunt opportunities: it takes bread-and-butter jumping skills and the fancy stuff just to cross the road. Because the game punishes repeated tricks you end up looking like a demented fly swatter as you try to vary your movements, and in the more intensive later areas it gets worse. It’s unintuitive, sore on the wrists, and needs too much thought for such an otherwise breezy game.

This reliance on waggling is the sticking point: there’s no configuration option where the buttons control the basics. Ubisoft has made an original skateboarding game that brings some color to the genre, and then plastered a ‘thou shalt waggle’ decree over it. There’s great structure to Shaun White Skateboarding, a breadcrumb trail of small missions (with their own rewards) taking you around each area, and it’s stuffed with loot like costumes and tunes.

The big moments occur when you trigger an ‘orange zone’ and pull off tricks around a prescribed course to restore the area’s color, much like in Okami. It’s a beautifully executed touch that visually nails a sense of ownership over the levels. The ridiculous settings produce some memorable rides, though the ‘plot’ and sk8er attitude are consistently bogus.

But everything is overshadowed by those controls. How did it get shipped without an option to use buttons for the most common move in the game? Does everyone at Ubisoft have wrists like melons? We’ll never know, but know this: seriously dude, wait for the sequel, or if you can, go for the PS3 or 360 versions.

If you'd like to see more articles from NGamer, you can get a subscription here.