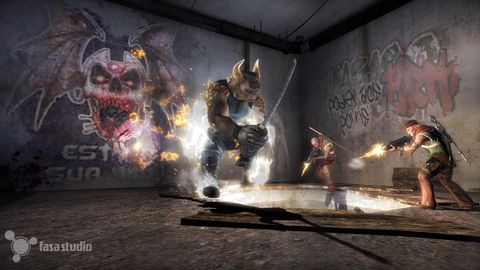 Whatever you're expecting from Shadowrun, you're bound to be disappointed.

Are you a fan of the pen-and-paper role-playing universe that combined cyberpunk tech with fantastical magic? Don't expect to find the depth of that fiction here. Shadowrun is a first person shooter, not an RPG, and the flimsy instruction manual contains far more story and character than the game itself.

Okay, so what if all you're looking for is a solid action experience to tide you over until Halo 3? Unfortunately, you won't find that, either. While the gameplay is unique, fast and fun, there simply isn't enough of it. The lack of a single player campaign and, more inexplicably, the severe limitations of the multiplayer result in a $60 title that somehow manages to be less meaty and less satisfying than a free beta demo.

The shame is that Shadowrun actually does quite a bit right. Thanks to the source material's unusual races and abilities, the combat is incredibly diverse. You can choose to run and gun as a human, elf, dwarf or troll, and the decision makes a bigger impact than you might expect. Each race has distinct, meaningful strengths and weaknesses that force you to play them differently to succeed. The elf is weak, but can move quickly and regenerate health. The dwarf is slower and smaller, but can steal magic and survive a single head shot.