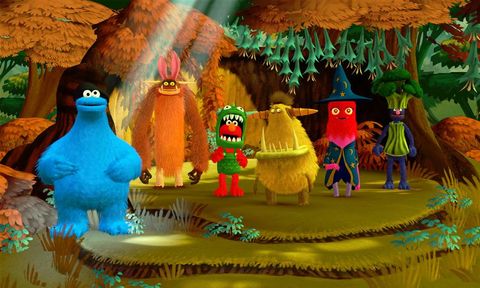 Sesame Street: Once Upon a Monster is a game made with the youngest of casual gamers in mind, but those in that audience will definitely go apeshit over being able to actually dance, perform plays, and go on adventures with their favorite Sesame Street characters. Children and parents are sure to love Once Upon a Monster as much as Cookie Monster loves to crumble up cookies in his hand and spit them out on the floor.

The game stars Sesame Street’s most famous faces, Elmo and Cookie Monster. Together they discover a strange, hairy book called Once Upon a Monster, and, in true Sesame Street fashion, ask the player to read the book with them. Players will go through chapters where they will meet new monsters who are in somewhat of a slump. Being the joy-spreading monsters that they are, Elmo and Cookie Monster decide to cheer up their new found friends. Making these monsters happy means doing things like helping a cowardly monster reach his dream of becoming a stage actor and cleaning up a garden that has been filled with Oscar the Grouch’s precious trash. All of the levels and minigames convey the same feeling as watching a television episode - Elmo and Cookie Monster constantly converse with the player and direct the player’s actions throughout the game as they would on the show.

Players participate in minigames like dressing the monsters according to color, playing the drums in a band, and mirroring dance moves using the Xbox 360’s Kinect. All of the controls are intuitive and exceedingly simple to follow, catering to the game’s young demographic. The Kinect also reads the simple movements very well. For example, in one minigame, players are required to play Oscar the Grouch’s version of basketball - throwing balls of garbage in a trash can. If players aren’t careful they can throw the trash ball too short or way too far depending on the force of the throw. So, the game isn’t so simple that a five year old could just flail their arms and progress through the whole game. Once Upon a Monster also moves at the player’s pace in all but a few minigames. It never punishes the player for missing a beat but rewards the player for every success with a bright, shiny star for the level.

As far as presentation goes, Once Upon a Monster looks, feels, and sounds just like the TV show, from Elmo’s infectious giggle right down to the life lessons in making friends, helping others, and sharing. Elmo and Cookie Monster are constantly narrating and giving instructions to the player, making the game easy to follow, even for young gamers. Children who are fans of Sesame Street are sure to be immediately engrossed in Once Upon a Monster from the live action intro scene all the way through the story mode.

While Once Upon a Monster doesn’t offer any additional modes other than the story campaign, it is fun while it lasts - taking us about three and a half hours to complete. Though, it is easy to imagine a child wanting to go back and play their favorite minigame over and over, and maybe even a parent trying to earn a few more stars in co-op.

Sesame Street: Once Upon a Monster is a great educational game that children can enjoy with their parents or on their own. The intuitive controls, easy-to-follow story, varied gameplay, and impressive dedication to the tone of the source material make this a great choice for young gamers, especially those who are already in love with the Sesame Street franchise. For anyone outside the child-parent demographic, however, unless there is a need to fill your living space with high pitched voices and extreme fits of joy, you might want to save up for the other bazillion releases coming this holiday.