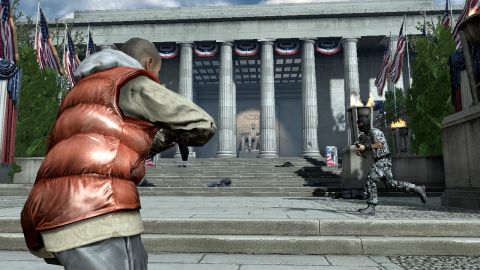 The President elect is under fire! It’s up to the Secret Service – basically, you and a load of idiots who get shot all the time – to protect him. If the plot seems like it’s courting disaster, especially in the current political climate, the action is playing it decidedly safe, doling out genero-gunplay and genero-terrorists like they’re going out of fashion.

You play as Agent Pierce, a man who shares a name and job with the bald bloke occasionally seen in 24, but is presumably very different, for copyright reasons. You’ll need to take down bad guys, hack computers, disable bombs, and eventually become a rogue agent. Er, just like 24 then. But without that pesky license that would have made it 10% more entertaining. The truth? It’s a reasonably solid experience. Stages may be artificially extended (trekking miles through tunnels to fix the power is a highlight), but the White House environment makes a welcome change from the muddy trenches or space-corridors we typically get to kill people in.

However they’ve painted the backdrop, though, there’s no denying the substandard package underneath. Everything shooters are legally required to include – regenerating health, some sort of cover mechanic – is in here, but executed clumsily, lacking any of the polish of something like Call of Duty 4.

It’s a surprisingly lengthy title – unlike CoD4 – but while Infinity Ward’s quick hit left you with a craving for more, Secret Service will leave you praying for the comedown to end. Weapons have a bit of oomph to them, and there’s a wide variety to discover, but there’s little joy in using them on enemies, when all they’ll do is vanish in response. A bit unsporting, considering how gleefully ready the terrorists were to explode in Cauldron’s last shooter, the gory Soldier of Fortune: Payback.

Things may have gone super-quiet for David Braben’s Presidential assassination adventure The Outsider, but this is not a worthy stopgap. Similarly, if you squint a bit, this could almost be 24: The Game. Except there was already one of those, and it was dumpo. Until Braben’s game emerges, it’s better, perhaps, to pop an episode of 24 into the disc tray, scrunch up your eyes, and pretend you’re playing Secret Service. Much more fun.