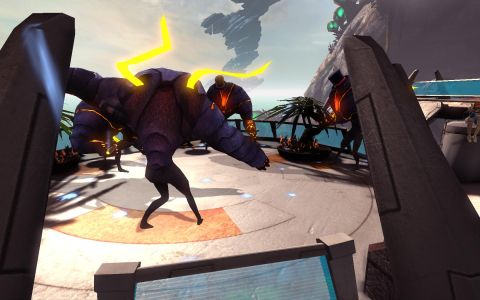 %26ldquo;Fixed fortifications are a monument to the stupidity of man.%26rdquo; General Patton said that. Dude was dead wrong, or at least he never played Sanctum. Created by indie developer Coffee Stain Studios, Sanctum is not your average tower defense game. Yes, you have to purchase, build, and upgrade turrets to defend a core from hordes of monsters ever increasing in size and difficulty, but there%26rsquo;s an element that makes Sanctum stand out: once you%26rsquo;ve completed your defensive positions, you can get into the fight yourself.

The entire game is played out in the first person perspective, which may take some getting used to, but it certainly doesn%26rsquo;t suffer for it. Actually, as you walk amongst the fortifications that you%26rsquo;ve carefully constructed, you gain a better appreciation of how and if your defensive strategy will work. If you are naturally funneled into a kill-zone, chances are the enemy will be too. On the subject of the enemy; Sanctum wields a wide variety of monsters, each with its own strengths and weaknesses, to be thrown against the player%26rsquo;s defenses. They range from the ridiculously easy like the Walker (which can be beaten by shooting it in the face) to the perpetually frustrating like the Soaker (which will require multiple Gatling guns just to harm). While a smart fortification strategy will take care of most of them without too much of a problem, there are times when you will have to get your own hands dirty.

Above: Some enemies hit the crouch button above your corpse; others dance around it with silly hats. The latter stings more

Sadly, the combat mechanics of the game are not really all that special. Though getting in the fight might be necessary (particularly in the early rounds) to make up the difference for deficiencies in your fortifications, we got the impression the player was little more than a mobile %26ldquo;smart%26rdquo; turret. The weapons never run out of ammo, limited only by an over-heating mechanic. The enemy monsters can%26rsquo;t harm or even seem to notice you. If they bump into you, your aim will be thrown and it will take a moment or two to recover and then you can get right back to the slaughter. Even if you%26rsquo;re careless enough to stand in the heart of the horde, being bumped and jostled like a ship at sea, you have the option to instantly teleport to a safe position any time you like. While all of this costs precious seconds better spent defending the core, the enemy is so innocuous that it defeats any sense of urgency the player might have.

Above: The assault rifle can%26rsquo;t hit the broad side of a barn. But with a horde this big, you don%26rsquo;t need it to

The game does become quite difficult, however. Even on the easy setting, any gaps in the defensive network will cost dearly. Also ensuring that your network is fielding the right type and variety of turrets to counter the enemies%26rsquo; weaknesses is nearly a science in itself, though the game is kind enough to inform you what type of creature will be coming down the pipe in the next round.

Above: Yes. The victory dance is Caramelldansen. Problem?

Sanctum is a neat concept and its modest price warrants a look. While the combat in the game leaves much to be desired, the new perspective on the tower defense genre is a welcome and refreshing change of pace. It only contains a few maps at the moment, though they offer much to master - particularly on the higher difficulty settings. Everything about the title is well-balanced if a bit slow-paced, and the maniacal cackle the player character lets out when you%26rsquo;re on a kill streak is just plain charming in its own right.