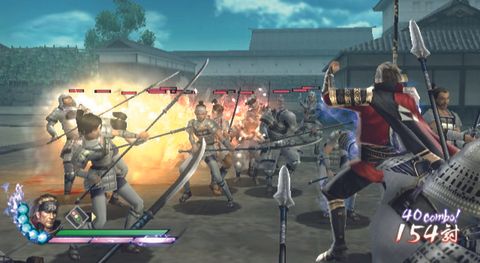 A lot of people think Omega Force don’t innovate with their long-running Dynasty Warriors/Samurai Warriors games, but that isn’t strictly true – they just innovate at a glacial pace that only vampires and giant tortoises can keep up with. Trust us, by 2861 we’re going to see the true sequel to 1997’s Dynasty Warriors… and the only ones left to appreciate it will be sparkly bloodsuckers, Galapagos reptiles and, probably, Andrew Lloyd Webber. Face it: the man’s clearly not human.

In the meantime, we have to make do with this: a game that is, to all intents and purposes, identical to everything else Omega Force have cranked out over the last decade. Sure, there are a few new modes and fresh faces, but if you’ve played (‘enjoyed’ isn’t the right word) any of the previous Warriors games, you know exactly what to expect: lots of running, lots of stabbing and not a lot in between.

The biggest change is actually the shift of platform. The move to Wii, and to a new audience, acts as something of a palate-cleanser – we can look at the game with a fresh pair of eyes, unburdened by the crushing weight of Warriors’ history. The problem is that even a fresh pair of eyes can spot the series’ biggest flaw: that it’s just too long in the tooth.

It’s a strategy game with no strategy – a hack ’n’ slash with no depth to either its hacking or its slashing. Back when Dynasty Warriors first appeared, these flaws were obscured by the epic scale of the battlefield-wide action, which was a relatively new phenomenon for consoles. Now all we can see is the hideously repetitive combat, the hopeless AI and the frankly shocking lack of options during battle.

For the uninitiated/untainted, all the games in this series plonk you into the boots of a legendary hero and make you run across a vast battlefield fulfilling a number of objectives – plus, of course, slaughtering everyone who happens to get in your way. You can also do this on horseback or, if you play as the speedy ninja Hanzo Hattori, you can double-jump your way around using secret ‘ninja paths’. Samurai Warriors is set in 16th century Japan, and the plot is confusing and alienating to a tee.

The third instalment starts promisingly enough, with ten different characters to choose from and a separate story mode for each. These unlikely warriors range from gruff, bearded types to alabaster pretty boys, to young women wielding oversized, jagged hula-hoops. They differ significantly enough in speed, strength and move sets to encourage you to try mucking about with all of them, and each campaign – containing just a handful of stages – is a cocktail of differing locations, objectives and enemies. You can eventually unlock a further 27 playable characters, many of whom come bundled with their own story modes too.

On the surface, that’s a hell of a lot of content. But, just as every word in the dictionary consists of recycled letters (the cheek!), every campaign in Warriors 3 is a playlist of shared stages, objectives and antagonists. In light of the average fighting game’s story mode this isn’t really a big deal, but the feeling that every stage is identical – identically boring, that is – is difficult to shake. Objectives differ, enemies differ, environments differ, but your involvement rarely extends beyond repeatedly smacking something in the face.

Extras-wise, the game offers split-screen co-op, a detailed character creation system, and a Historical mode where you can put your avatars to good use. There’s also the RPG-lite stylings of Murasame Castle, which replaces enemy soldiers with demonic zombies… that just happen to look a hell of a lot like enemy soldiers. Disappointingly, these modes don’t differ significantly from one another, the nitty gritty remaining as hack ’n’ slash-orientated as ever.

Of course, there’s nothing wrong with hacking and slashing – well, there’s a quite a lot wrong with it in real life – but you do so damned much of it here that you may feel like turning the blade on yourself. Often we resorted to running past enemy troops rather than stabbing yet more of the blighters every time we had to pelt across the playing field to assist a fellow officer.

Sadly, this isn’t possible during the excruciating escort missions, because your stupid companions like nothing better than stopping to tackle every single enemy along the way. Missions feel artificially extended by the sheer volume of human meat stumbling into the path of your righteous blade, whip or hula-hoop. They’re also extended by the brutal difficulty of playing the game on Normal – downgrade to Easy and you’ll have a far more enjoyable time.

This wasn’t a terrible game in 1997 and it’s not a terrible game now. It is, however, fundamentally the same game, and whether you’re an old hand at the series or experiencing it for the first time, you’ll soon find that you’ve stumbled into the most pathologically stubborn series ever made, and one that you’re going to need a lot of patience to enjoy.