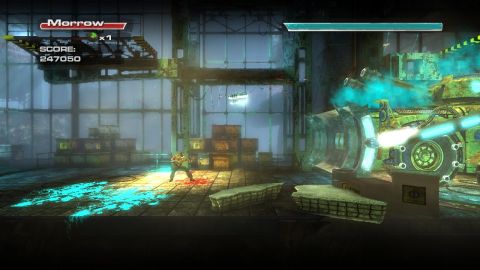 Rush’N Attack: Ex-Patriot is the perfect game for retro fans who enjoyed the 1985 original but wanted it to suck. This game functions like a veritable checklist of what not to do when designing an HD remake/re-imagining/re-whatever. Contrary to successful throwback games like Bionic Commando: Rearmed and Shadow Complex, Rush’N Attack is an absolute cash-in devoid of any substance or charm.

Take the premise of any schlocky Cold War action movie made in the 80s, remove anything that’s remotely fun or likeable about it and you’ve got Rush’N Attack’s plot. Taking on the role of all-American badass ninja commando Sid Morrow (codenamed Wolf Spider, of course), it’s your job to lead a spec-ops team of knife specialists (not shitting you) to investigate some sort of experimental Russian super weapon. Comically, your team immediately gets its ass kicked and thrown into a gulag somewhere (this all occurs before you even get to start hitting buttons). Subsequently, some dude who’s obviously not going to be a giant plot twist further down the line breaks you out of your cell, hands you a Bowie knife that’s about eight sizes too big and starts listing off videogame objectives.

From hilarious start to mind-numbing finish, Rush’N Attack plays out like a grittier crappier Bionic Commando: Rearmed. The introduction utilizes an animated comic book presentation and all dialogue is depicted through text next to static portraits. Also like Bionic Commando, this game makes use of the whole 2.5D look; however, unlike the game it’s so clearly modeling itself after, Rush’N Attack manages to maintain a careful balance between boring character design and bland ugly visuals. All of your enemies are Helghast rejects and the main character looks like something a 13 year old Slipknot fan would doodle in their notebook during class.

The gameplay basically follows suit with the original and expands on next to nothing. The focus is on platforming and melee combat wherein the platforming sucks due to sluggish controls and the combat is boring and repetitive. You can mix up the monotony of shanking countless guards by attempting stealth kills or picking up special weapons like rocket launchers and assault rifles, but it’ll do little to offset the perpetual tediousness of the whole thing throughout each stage.

From the very start of the game, it becomes quickly apparent that Rush’N Attack has nowhere to go but down. The visuals are ugly and look dated, it borrows the majority of its concepts from other better games and it simply is no fun to play. We don’t care how much you enjoyed the original Rush’N Attack. Keep your distance with this one.