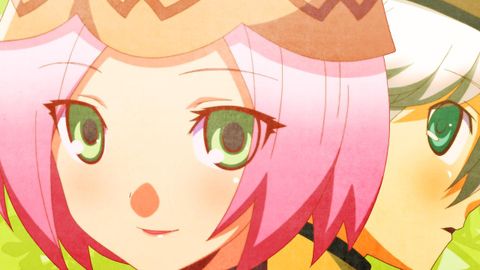 Have you had hobo stew before? We knew a hobo once who could make a real mean stew. There’s no science to the recipe. You just take whatever you can scrounge up and throw it all into a boiling pot. Some of those ingredients may be better by themselves or if prepared differently, but when you’re a hobo you take what you can get. Rune Factory: Tides of Destiny is a stew with plenty of fixings in the pot, but it’s a bit overcooked.

Above: All screens are from the PS3 version

The Rune Factory games stem from the cult favorite Harvest Moon series. Where Harvest Moon focused on farming crops and building relationships within a strict time limit, Rune Factory puts an emphasis on a more open experience with combat and dungeon exploration, while retaining the basic elements of its predecessor.

Tides of Destiny stars Aden and Sonja, two friends living on Fenith Island during a peaceful age. Everything changes when a mysterious light puts Sonja’s soul into Aden’s body and transports he/she/them to an unfamiliar location with only one dragon. When Aden awakens, he finds out he is still on Fenith Island, but in the future. Don’t get mad, but that whole future thing is technically a spoiler. To be honest though, if you don’t pick up on the heavy-handed hints during the sleep inducing intro, then that means someone hasn’t gotten their Brain Age exercises in for the day.

With the intro out of the way, players are free to explore the huge laundry list of tasks available. Hours can be spent exploring dungeons, riding a giant golem on the even more gigantic world map, pursuing relationships, leveling up stats, helping people around town, learning new attacks, training monsters, fishing, farming, crafting, or cooking. Players can easily rack up dozens of hours and completely ignore the plot. At first it may all seem a little intimidating, but it’s actually quite easy to find a routine and slowly wade your way through all the content.

Now for the unfortunate kicker: all those activities kind of suck. Almost every single minigame and task you can perform lacks any form of depth and creative thought. The crafting, cooking, and fishing minigames are treated with an all too familiar contextual meter. When you stop a moving arrow over the “good” side on the meter, you win. You can also level up just about every action Aden can perform, but there’s no indication that you’re getting better at any of them. Who wants to level up their sleeping or greetings? What does a level 20 greeting even sound like? What’s even worse is when you level up a useful ability like Aden’s jump and then see no change. It makes more sense to see your character jump a little higher or gain new jumping abilities instead of, you know, getting nothing.

Then there’s the problem with Rune Points. Under the health bar is Aden’s RP, which track the amount of stamina he has left. Everything you do will cause a decrease in RP. Once RP are depleted, all actions will cause HP to quickly vanish. The idea behind these points makes perfect sense. RP limits what you can do within the in-game calendar so players aren’t planting and picking crops in the same day. However, combat drains stamina too quickly, leaving you in the middle of a dungeon with no ability to fight. There are ways to extend your RP bar and refill it when it gets low, but these methods require a lot of time playing the other minigames which, as already covered, suck.

Combat is the biggest and blandest offender in this already tepid game. Surprisingly, combat starts off interesting enough. Before your first fight, you get to choose from several different weapon types, each with its own strengths and weaknesses. Unfortunately, from here it’s a brainless attack mash fest. The only strategy available is to stop attacking when an enemy fights back. You gain new special attacks through repeated use, but these new attacks are, in most cases, flat-out ineffective and quick to drain your RP. When going through a multi-floored dungeon with regenerating enemies, it makes more sense to avoid the monsters than to try and fight them. Players of a genre involving such a big expansive world probably want to be able to explore every detail of a dungeon at their own pace. Instead you’ll find yourself flying through dungeons because the reward for fighting a horde of monsters isn’t worth the RP.

Rune Factory does have a lot going for it on the surface: it’s an aesthetically pleasing game where, even after 50 hours, may still have some surprises in store. It’s when you get into the tedium of every activity that you realize a game that only does a few things well holds more value than a game that does a dozen things poorly. Variety is supposed to be the spice of life, but let’s be honest, everything has its limits.