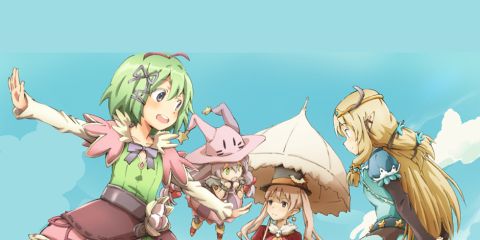 At their worst, simulation games can feel more like work than play. Rather than having fun, you can easily feel stressed out by accomplishing tasks within tightly set parameters, or you're missing content due to unenjoyable-but-necessary choices, or you just get bogged down in granular minutiae that yields no tangible result. But every once in a while a special game will come along and make these types of shortcomings feel worth it. Enter Rune Factory 4.

It isn't a very complicated game--at least, at first it isn't. After choosing between a male and female avatar (the latter of which is offered for the first time in the series), you'll find yourself rummaging around a mysterious town, where you're mistaken as royalty. Honestly? That's about as far as the story goes, if you can even call it a story, because like other simulation games you're going to get most of your satisfaction out of forging your own tale.

If you can think of it, you can most likely do it in the fourth iteration of Rune Factory. Farming, cooking, gathering, dungeon-crawling, relationship-building, and wanderlusting are all fair game, and nearly all of your activities (such as crafting, farming, dungeon crawling, and even walking or taking a bath) have their own deep and rewarding levels of progression. While the visuals are decidedly dated in the sense that it looks like a first generation DS game, the design here has an undeniable amount of charm.

Just like past Rune Factory games, the cast is as quirky and colorful as ever, partially thanks to a solid localization from XSEED. You’ll find yourself falling in love with people like Margaret, an eligible bachelorette that’s terrified of heights, or the gullible butler-in-training Vishnal. Pretty much every member of the town is likeable in their own way. As with the narrative, you won't find anything that blows away typical genre conventions, but Rune Factory 4 makes up for it with a vibrant canvas of personality and an interesting set of dialog to boot. Long term relationships and marriage are also an option, and although they don't feel as organic as they could've been, they're fun distractions.

While the town-centric happenings are pretty eventful, dungeon-crawling sometimes devolves into nothing more than a chore. The crux of the issue is Rune Factory 4's dungeon design, which largely follows the trite go-here-pull-this-lever structure. Boss fights tend to follow the same conventions throughout the game instead of providing a consistent challenge. Most of them feel like a grind, which is a shame considering there's a bigger focus on combat in Rune Factory 4 than in previous games.

Rune Factory 4's biggest problem, though, is its hand-holding. For what feels like hours on end, the game has to teach you about every little thing before you're allowed to actually experience it. If you’re someone who plays a lot of RPGs and know the basics inside and out, you're still going to have to go through a tutorial for some 10 hours, performing menial tasks until the game trusts you to take over. On the flipside though, that means this is the perfect entry for newcomers.

Should you decide to power through the initial tedium, the game really opens up and never lets go. Once everything is available, there's almost no end to what you can accomplish, or what you can choose to do. If you decide on scavenging for equipment, you'll often find that your dungeon runs will produce more useful spoils than most other games. If cooking and fishing are your thing, you'll constantly find new recipes and fishing holes to keep things feeling fresh. Further, resources called Prince/Princess Points allow you to customize the game to your liking, whether that be creating new events in town, expanding your cooking abilities, or upgrading your character's offensive or gathering abilities.

Regardless of your input, your town will improve over time, and more events and buildings will unlock, prodding you to keep taking care of your townsfolk. Although dungeons can be a bore, resources abound within them--and, of course, monsters to tame. In Rune Factory 4, monsters can be used as farm hands and can create items, which adds a new level of usefulness outside of combat. The can perform tasks that you may not have much fun doing yourself, freeing you up to do the things you actually want to.

With deeper combat and a shorter tutorial, Rune Factory 4 could've been an exceptional game. But if you're willing to slog through until it opens up, you'll find an enjoyable offering packed with some fun simulations and an elaborate crafting system. Sure, it plays things safe, but there's a surprising amount of fun to be had crafting items, taming monsters, and building relationships in between sometimes-bland dungeon runs.

Chris Carter is a gaming writer that holds a Philosophy Degree and a Political Science Criminology Degree. What does that have to do with the written word? A lot, actually!
See comments