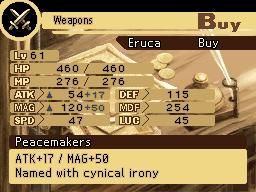 Japanese role-playing games frequently fall into the same clichés and it’s becoming increasingly difficult to find new ideas within the genre. Thankfully, Radiant Historia provides us with something innovative and mind-boggling.

Radiant Historia begins like so many games in the genre with a solemn and quiet hero being thrust into a conflict he views as necessary but unfortunate. You are Stocke, a special agent who is quickly given the option to remain a spy or become a soldier in a history-changing war between two kingdoms. This decision splits the storyline into two branches which together form the focus of the game: time travel.

We soon realized that the sheer amount of options this presents borders on soul-sucking replay value. Stocke jumps freely around in time - thanks to a magical book - fetching items or knowledge from separate storylines (the past or the future) and using them to his advantage.

We yawned through much of the beginning of the game, but the story jumps from simple to complex in mere minutes. The dialog is a bit heavy, even for a JRPG, and more than a few times we clicked through text for up to 20 minutes in between battles. The game has a fast forward button and a button to skip entire scenes, but without a grasp on the story, figuring out what to do next was sometimes near-impossible.

The game introduces a fun twist on turn-based combat – a 3x3 grid in which enemies can move and be moved. If enemies are farther from your character they will do less damage, but so will you. Enemies can also be pushed onto the same space in order to damage them both. This dynamic creates endless combinations and creativity that result in Tetris-like satisfaction. During a boss battle, we pushed two characters onto the same block, knocked them up in the air, and shocked them in a successful (and dare we say genius) combo. The learning curve can be steep at times, but we found that when in doubt, traveling back in time to battle lower-level enemies was the perfect fix.

Yoko Shimomura, who scored the Kingdom Hearts series, creates an entrancing soundtrack that we found ourselves humming during particularly epic parts of our day. The sound effects are great quality and avoid the traditional annoying grunts and screams. Ninety degrees away, your eyes will be just as pleased as your ears. The visuals often made us nod in approval. Stunning colors, well-realized characters and beautiful battle animations make Radiant Historia glow.

If you, like so many DS users, are looking for a great RPG to fill you up and never let you down, look no further. While the dialog in Radiant Historia can become longwinded, the gameplay, music and graphics make up for it and then some. The gameplay potential posed by time travel is fully exploited and the game weighs in at well over 30 hours. That is if you can stop surfing through time-space long enough to reach the end… if there is an end… oh, our heads.