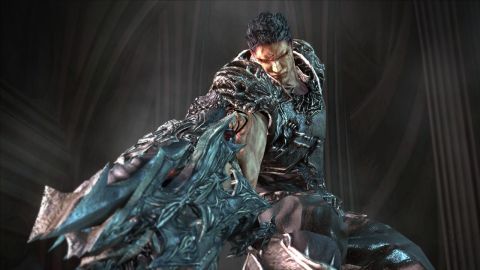 The title says it all, in that it says nothing at all. Quantum theory, by scientific definition, charts the behavior of matter on an atomic and subatomic level. It denotes a level of subtlety, an insane attention to detail. It certainly doesn’t denote seven foot meat mounds firing guns the size of small cows. Quantum Theory, the game, isn’t just broad; it is the loosest, baggiest and downright shoddiest of third-person shooters.

Above: You know the old saying, the bigger they are… the more Quantum Theory struggles to render them

Gears of War is the model. Epic’s ideas and art design are vaguely transposed, but it’s all borked – like Gears passed around in Chinese whispers and then translated back into English. Both games boast meaty visual design, but where Gears carves the meat into recognizable heroes and bastes them with glistening tech gravy, Quantum’s freaks are a formless, functionless mess. Our hero Syd manages to out-ugly Marcus Feenix, Mr. Testicle Face himself, and comes armed with a selection of lumpy prongs – maybe weapons, maybe melted kitchen utensils.

Weapons fire as vaguely as they look. Shots sigh out of the barrel and nudge enemies to death. The grenade launcher farts out balls that tend to give up halfway, hit the dirt and impotently pop out of existence. And don’t get us started on the electro ray – this pumped up cattle prod emits a static sprite pic of a lightning bolt which simply wobbles foes to death.

Above: The least practical "serious" weapon ever? If that blade on the end is spinning, what's it doing to his fingers?

To make matters worse, a disease spreads through the levels, altering their physical design on the fly. Rather brilliantly, cover appears and disappears on a whim – at last, it’s the design innovation your high blood pressure’s been waiting for! The disease also delivers giant worms. Not only do they look atrocious, like animated slabs of corned beef, they introduce fist-gnawingly incompetent platforming to the proceedings. It makes the crap rope-swinging antics in Call of Juarez feel like Mario Galaxy.

Theory’s other ‘fun’ hook is Syd’s female co-partner, Filena. Sold to us during development as neat strategy-bolstering AI, Filena is little more than a replacement for grenades and melee attacks. Syd can throw her at enemies for slow-mo takedowns or time melee attacks for hand-in-hand drubbings. Both work fine, even if throwing her is a little overpowered, but they really aren’t anything more than we’d expect from any competent third-person action hero. Which Syd largely isn’t. It doesn’t take a quantum theorist to see this is rotten.

Above: Hey Quantum Theory, Gears of War 2 called, it wants its last boss back