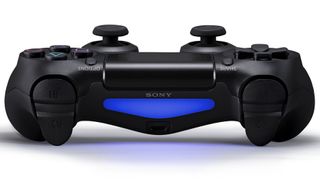 If you're the type who plays on PC as well as PS4, you're gonna be pleased with this news: Sony has announced that you'll soon be able to use your DualShock 4 controller with a PC, totally wire-free and official - no more messing with cables or third-party gamepad-mapping software. The DualShock 4 USB Wireless Adaptor (yes, it's spelled with an "O") will launch early September for $24.99 / £19.99. Plug it in and you'll be able to use your PS4 controller for any game or application that supports it.

While that list may be relatively small right now, including just a few games and the Remote Play app, Sony is going to bolster it by launching PlayStation Now for Windows "soon". That means that if you subscribe to PlayStation Now, you'll be able to stream PlayStation-exclusive games on your Windows PC, and if you've got the Wireless Adaptor (blugh, typing it that way makes my brain hurt), you can play them using the proper Sony joysticks and buttons.

Patents for the Adap… the device appeared in July, and it didn't take long for you all to figure out what it was for. Just a short two months later, the idea will become reality.