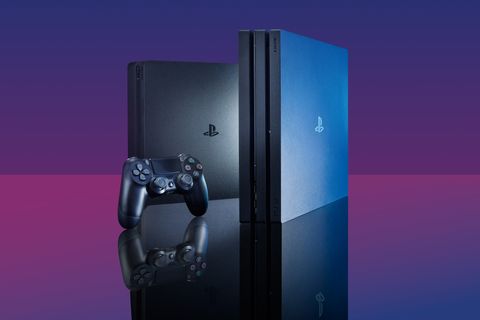 Released towards the end of 2016, the PlayStation 4 Pro was both a major departure for the platform and a big step forward.

Where dedicated PC gamers typically upgrade to new hardware every two years or so, most typically via a new graphics card, console gamers are stuck playing on the same hardware for much longer. That worked out fine when consoles like the PS2 were more powerful than PCs at launch, and priced at a loss as a result, but the PS4 and its competitor the Xbox One were designed with more conservative hardware to minimise losses.

As the PS4 hardware remained static, topping out at Full HD 1080p at 60 frames per second (with 30fps being most common), PC gamers moved onto gaming at higher resolutions and higher frame rates.

Not wanting to lose players to the PC, the PS4 Pro was released to bridge the gap between the original PS4 and the 4K-ready hardware of PC gamers. It supports 4K gaming, HDR (high dynamic range) content and dramatically improves frame rate in certain games for a more responsive, smoother experience.

If you’re looking at buying a PlayStation, then, the question is: which one is the right one for me?

To look at each console, you’d be forgiven for not being able to immediately tell the difference between them. The original PS4 with its shiny two-tone finish has now been discontinued in favour of the smaller and quieter PS4 Slim, which looks a lot like the PS4 Pro.

It sounds confusing but don’t worry: both the original PS4 and the Slim are functionally identical and instead differ only in terms of form factor and the noise they emit under load. While there are technically three different PS4s, this is fundamentally a two horse race—Slim and Pro.

Each unit is a sleek black box, with a wedged design giving them the look of a futuristic plastic sandwich. The PS4 Slim is the smallest and quietest console in the PlayStation lineup, while the Pro is a layer thicker and can be considerably louder, depending on the game you’re playing. Recent releases like God of War do tend to send the Pro’s fan a little bit loopy when on-screen action gets more demanding, but it’s not too bad on the whole.

There are more significant changes internally. The Pro’s CPU—think of this as the brain of console—is mildly upgraded over the PS4. But the GPU, the bit that turns instructions from the CPU into graphics that display on a TV, is massively improved.

Both are produced by silicon valley stalwarts AMD, which has its roots in PC hardware. The result is a console that can render games at higher resolutions, making it a perfect fit for 2018’s raft of ultra HD 4K TVs and HDR panels. Games like God of War and the upcoming Assassin’s Creed Odyssey and Red Dead Redemption 2 both promise improved fidelity on PS4 Pro as well as more vivid colours and improved contrast thanks to HDR.

Those games still look great on a PS4 Slim, but the increased level of detail on PS4 Pro, not to mention the option for higher frame rates, makes it the superior experience. Notably, both the PS4 and PS4 Pro play the exact same games, so there’s no worry of missing out, whichever you buy. That also means you don’t have to buy new games if you upgrade from a PS4 to a Pro.

Most games offer at least two options in the graphical settings on PS4 Pro: one that favours resolution and another that favours frame rate. Favouring resolution typically means the PS4 Pro outputs games at 4K (or at least an upscaled version of 4K) at 30fps for the sharpest picture Favouring frame rate usually drops the resolution down to Full HD 1080p, but increases the frame rate to 60fps for smoother, more responsive gameplay.

Do you even VR, bro?

Other differences between the PS4 Slim and Pro include 1TB of storage space as standard on the Pro (although there is a 1TB option for the Slim), as well as improved performance for PlayStation VR. PSVR, Sony’s virtual reality system, was developed alongside the Pro, with its increased graphical grunt being especially useful for driving the super- fast frame rates needed for a nausea- free VR experience.

Different too is media streaming. The Pro is capable of outputting 4K video if you have the appropriate Netflix or Amazon subscription, while PS4 tops out at Full HD. It’s also worth noting that, unlike the Xbox One S and Xbox One X, the PS4 and PS4 Pro aren’t able to read 4K Blu-Ray discs.

Of course, budget plays its part. The PS4 Slim is the cheapest option and nowadays you can find some excellent deals, whether you’re looking for the console on its own, or as part of a bundle with a game. Prices range from around £249.99 for a PS4 Slim with 500GB of storage space and increase to £299.99 for the 1TB model. Meanwhile, the PS4 Pro starts at £349.99 and upwards, but 1TB of storage space comes as standard.