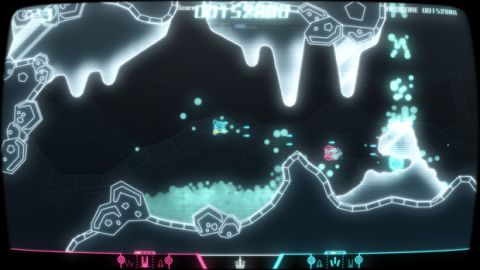 Attempting to capture old-fashioned, challenging gameplay in this day and age hasn’t been easy for a lot of small developers working on downloadable nostalgia games. Simply making your game difficult isn’t enough – a game can be difficult for the wrong reasons, like bad controls, unintuitive dangers, and unnecessarily punishing checkpoints. PixelJunk understands how to do it right, as they showed with their Shooter games (which were closer to puzzle games than true shooters), and they have demonstrated even more skill with PixelJunk SideScroller. This is a classic shoot-‘em-up, a la Gradius, but with the modern styling PixelJunk games pull off so effortlessly.

Your ship, the enemies, and some of the sounds have been borrowed from the Shooter games, but SideScroller is pure, fast-paced action, with bullets flying like they’re going out of fashion (but they aren’t because bullets will always be fashionable). The game never reaches full-on bullet-hell levels of insanity, but it comes close, and it is not an easy game. We love it, though, because it’s so smartly designed and its difficulty stems from the right ideas – fair, surmountable dangers. If you choose to increase the difficulty level (and we highly recommend it after you beat it on Normal), the dangers become a bit less fair, but then that’s why the modes are called Hard and Brutal, right?

The weapon system is simple, yet feels great because there’s no redundancy – your ship doesn’t have random weapons “just because.” It has exactly three weapons, all of which you start off with, and each one fills an essential role. You have your machine gun, which when powered up gets more angles of fire until you can almost fill the screen with bullets, and which is designed for handling large numbers of fast-moving enemies. You have your bombs, which arc upward and downward from your ship, bouncing along floors and ceilings, perfect for dealing with ground-based enemies (and, in fact, they do more damage to those enemy types). Finally you have your slow-firing, high-damage laser, which is perfect for taking on bosses and more armored enemies, and when upgraded can fire in four directions, allowing for some angles of attack the other two weapons don’t provide.

You can swap between weapons on the fly, and each is upgraded independently. Experiment with each weapon and you’ll learn when to use each one – in a wide open space full of flying enemies? Use the machine gun. See some narrow tunnels ahead? Swap to bombs. Of course, if you really like one weapon or hate another, you can make do with your favorite. You also have a charge move that allows you to just plow your ship through enemies for an advanced finesse maneuver. As in the Shooter games, you don’t so much take damage as accumulate heat, so if you get hit once, you’ll be in “overheat” mode, which means one more shot will kill you, but if you can douse yourself in water, you’ll “heal” the damage.

Aesthetically, PixelJunk SideScroller will lay your senses down on a luxuriant sofa, as the glowy Tron-like visuals stroke your pupils and the absolutely bombastic soundtrack gets your skull bobbing. Both the visuals and music appear minimalist but hide incredible detail if you look for it, especially in the final level of the game, which does these amazing graphical morphs and has a seriously epic final song. As an added treat, if you bump the difficulty to Hard, the entire game’s color palette changes, and then it changes again if you play Brutal difficulty. Enemy behaviors change slightly as well, especially on Brutal, so the game has fantastic replay value. Oh, did we mention there’s also two-player co-op? The game doesn’t seem to tell you this anywhere, but simply plug in two controllers and off you go!

If there’s a complaint we can have with the game, it’s that the visual style can make it difficult to make out enemy bullets sometimes. The game could have benefitted from a specific, distinct color for enemy fire, because sometimes it gets lost in the background or even your own bullets. The argument could be made that the game is designed this way on purpose and your job is to learn to see through the noise, an argument supported by the design of Brutal difficulty, which turns the entire game black-and-white in an obvious intentional twist to make it really hard to make out bullets. However, much of the time that we died, we were taken by surprise, wondering what hit us. It’s not that bad, though, and the game never really became frustrating, even when we died over and over.

Small developers looking to create old-style 2D games that are difficult should study PixelJunk SideScroller as a template: it has responsive controls, non-punishing checkpoints, and intuitively-flowing level design even as it throws serious danger at the player constantly. It’s not perfect, but it’s shooter purity in an electric-glowing bottle that may not go down easy, but it sure tastes delicious with every gulp.