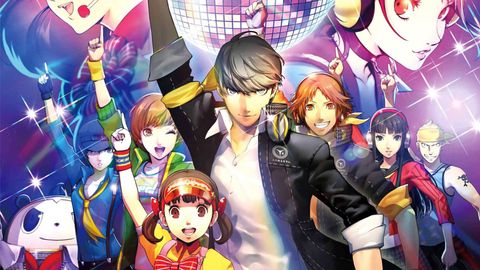 A challenging, gorgeous rhythm game that marks a joyous reunion with characters you adore. It's a new way to enjoy Persona 4’s outstanding soundtrack.

Persona 4 is a turn-based dungeon crawl featuring literal inner demons and deep thoughts about steak croquettes, and as such isn’t something you’d immediately assume would convert well to a rhythm game. What saves Persona 4: Dancing All Night from being a silly knock-off meant to tide fans over until Persona 5 comes out next summer is how fully it commits to its premise of salvation through personal expression, applying the same masterful touch to dancing that was present in Persona 4’s fighting. The fact that the dancing is pretty damn great and the soundtrack is amazing sure doesn’t hurt any, though.

Credit where it’s due, the Persona team came up with a fairly plausible reason why Yu and the crew are shaking their groove things. Rise the pop idol is planning her comeback, and wants her pals from Inaba to be her backup dancers, though a mysterious crisis may prevent the concert from happening. People checking out the festival’s web site have been falling into deep comas, with urban legend chalking it up to the soul of a dead pop idol exacting some sort of mystical revenge. Those are the lucky ones, though - a select few, including Rise’s pop star colleagues, have been pulled into a dark dimension populated by shadows.

And this is the point where Persona 4 fans begin to nod knowingly, and anyone new to the scene starts wondering what the hell everyone in the game is talking about. Dancing All Night basically assumes you know all about the Shadow World, summoning personas, and everything else that went down in Persona 4, like why Teddie is both a bear suit and a young blond guy. If you’re not up to date, a lot of the references are going to go sailing over your head, but the basic gist is clear: whoever is pulling people into the Shadow World is awfully twisted, and in order to rescue everyone, you’re going to have to really Be Yourself, which means expressing your inner self by dancing. Ok, it’s not exactly Shakespeare, but as explanations for how shaking your money maker is a suitable replacement for combat go, it’s darn good.

Not that the explanation is really necessary, honestly, given how good the dancing is. The rhythm game sequences in Dancing All Night are exceptionally well done, using music from Persona 4 and tying it with gorgeous animations of the characters shimmying along to the beat. The format is pretty basic - tap the face buttons or D-pad in time with the beat when stars hit their marks - but songs get very challenging very quickly. Hitting notes correctly increases your combo and adds to your Fever Meter, which triggers a dancing partner when it fills up, sending your score into the stratosphere. Dance your best and the Shadows will be liberated from the ribbons that are tying them down, but fail to please the audience and…well, you’ll just have to try again. Dancing All Night may have a lot in common with Persona 4, but its pressure for success is quite a bit lower.

The learning curve is basically perfect, letting you get used to the mechanics with some easier tunes before ramping up the difficulty and really putting your fingers to the test. It’s not just that the songs get faster, though some certainly take that approach in order to increase the challenge. Songs that are so slow you’d think they’d be a breeze have cunning arrangements, throwing intricate button combos at you that will stop your brain dead in its tracks. Again, Persona 4 fans will have an edge as they already know most of the songs by heart (anyone who finished that game heard them an average of 1.32 million times), though remixes keep the challenge fresh.

The one area where Dancing All Night falters is with its story, which is at times monstrously tedious. The plot itself is pretty good, and the sections of voiced dialog are enjoyable to watch, even if they use static pieces of art and chat bubbles. But there is a bunch of text to read in between those scenes, and the writers never say in one sentence what they can say in five. Key plot points are repeated a lot (yes, yes, we know how tough a lady Ms. Ochimizu is, thank you), which is great if you’ve put the game away for a while and need a refresher on what’s happening, but is stultifying if you’re playing straight through and paying an iota of attention. Fortunately, you can speed through the dialog whenever you feel like it’s going in circles.

If you’d rather not be bothered with the story at all, Free Dance mode lets you just get right to the good stuff straight away. You can play through a bunch of songs without having to unlock them first in Story Mode, adjusting difficulty to practice or really test your mettle. It’s worth playing the story, for sure, but you could just stick to Free Dance and be pretty damn happy with your experience. Cash you earn from completing songs can be used to buy new outfits for characters or powerups to help you get super high scores, with DLC adding new songs and new stuff to buy.

Persona 4: Dancing All Night will not fill the hole in your heart left by the absence of Persona 5, but it’s an outstanding game in its own right. It treats its source material with respect and love, successfully tapping into the joy you feel when you’re hanging out with your best friends and grooving to the music. It’s colorful and happy, and a really damn fine rhythm challenge, too. Get ready…to dance!

A challenging, gorgeous rhythm game that marks a joyous reunion with characters you adore. It's a new way to enjoy Persona 4’s outstanding soundtrack.