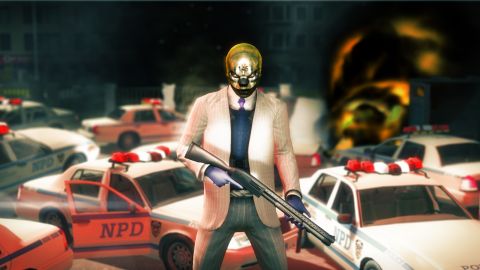 Remember the climactic bank heist in the immaculately-constructed crime-thriller Heat? Remember the tense, pumping music, the incredible crack of gunshots ringing out through downtown LA streets? Remember Robert De Niro and company gunning down like a hundred cops? Payday: The Heist superbly captures everything about that scene, providing a unique sense of urgency found in few other games. Sure, the game is clearly cobbled together from the brilliant ideas of other co-op games (well, mostly Left 4 Dead), but nowhere else will you find that endorphin-rush mixed with tense anxiety that your fantasies of bank robbery conjure up. There’s just something wonderfully anti-social about pressing a button and having your guy yell “Get down on the ground and STAY down!”

Above: Plus creepy, nonsensically patriotic masks

Payday is a $20 downloadable game for PS3 and PC, and what you get is four-player co-op (no competitive multiplayer) with six missions, each of which take anywhere from thirty minutes to an hour to complete. The missions have great variety: there’s the iconic bank heist, a chase after a double-crosser through city streets, a daring stick-up at a crank-house, a prisoner extraction on a traffic-choked and rain-slicked bridge, a diamond heist in a high-rise corporate headquarters, and a gold-grab that goes a bit wonky and ends up in a slaughterhouse. Each mission manages to bring a unique flavor to the mix, so even though there are only six levels, the game feels full of ideas. There is also a plan for DLC, so we assume we’ll see more missions to come.

The bank robbery mission perfectly exemplifies everything the game offers – you walk into the lobby with three friends and can start the heist whenever you please. The music that kicks in is so, so obviously a rip-off of the same music from that scene in Heat we mentioned earlier, but we don’t care that it’s a rip-off because the music is so damn good and so effective at conveying the mounting tension as the cops arrive and begin making their assault. Since it’s a proper Hollywood-inspired heist, it requires a multi-part plan: first you need the keycard from the bank manager, which you can get by tying him up (you can also tie up other hostages to keep them from escaping). Then you have to get a drill and thermite which have been stashed inside a copy machine. The drill attaches to the vault door and takes several minutes to get through – in the meantime, the cops will be coming in force. They push in assault waves similar to the zombie rushes in Left 4 Dead, but instead of simply swarming you, they drop smoke grenades that only they can see through with their infrared vision, they come rappelling through windows SWAT style, and they set up snipers on nearby rooftops.

Above: You can also typically grab more loot than is required... which begs the question: who wouldn't grab extra cash?

Also as in Left 4 Dead, there are “special” cops that your teammates will call out with voice lines. There’s the taser unit which will charge up and then zap your ass from a distance, so your team mates will need to come assist you. In a nice touch, you can still fire your weapon while being electrocuted, but you’re inaccurate, so sometimes you can pull off a save on yourself. The bulldozer is what you’d expect – an armored-up dude with a shotgun that can take serious punishment. The cloakers are particularly devious, as they don’t seem special until they get close to you – one whack of their melee attack will immobilize you, and they’ll even cuff you and wait for your teammates to come try to save you. All the while, your drill at the vault will occasionally jam and you’ll have to restart it. Frantic doesn’t begin to describe Payday.

Once the vault’s open you have to go deeper inside where you’ll pour thermite on the roof of the inner vault, and then once in there you need to fill your duffel bags with the cash (always a great feeling of satisfying your greed). Finally, it’s an all-out push back through the bank and a mad dash for the backdoor escape route. So while the nuts and bolts of waves of normal enemies punctuated by special enemies that require teamwork to deal with may seem to make Payday look like a Left 4 Dead clone, the structures of the heists actually end up concocting a unique recipe. The pressure, anxiety, and rush of being the bad guys going for pure material goals and the layered objectives give Payday a fresh feeling that just isn’t found in other games currently available.

Above: The tranquil bank lobby, which will soon be filled with blood, glass, and screams

As an actual shooter Payday isn’t exemplary, though. The aiming and shooting just feels a bit mushy and unsatisfying. We wish there were more weapons available at the start – all you get is a pistol and an assault rifle and it takes a while before you can unlock anything else (we didn’t unlock any weapons even after playing through all the missions once, and even then a bit after that). The unlocking system is confusing as it’s hard to tell how to unlock items or when they’re unlocked. We also wish the statistics screen at the end of missions had more info – it would be great to see every detail of who accomplished what instead of just the basics like most kills and accuracy.

Payday is clearly meant to be played with three friends, but if your plan is to go solo it’s still worth your time and money. The partner AI is surprisingly competent, and aside from a few expected quirks, never made us yell “What are you doing? Get over here!” like we’re used to in most games with partner AI. You can breeze through all the missions in a few hours, but they’re quite replayable so it’s not a bad deal for $20. Regardless of its imperfections, if you’re wondering about getting Payday: The Heist, simply ask yourself: did that scene from Heat get my blood pumping? Did those robberies in Point Break make me want to don a president mask and go buckwild on some bank tellers? Your answer will steer you in the right direction.