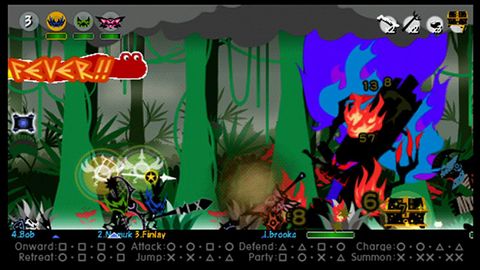 Do you know what Patapon is? Have you played the first two Patapon games to completion? If you answered "no" to one of those questions, Patapon 3 is not for you. At its core, Patapon 3 is a unique, addicting rhythm game, but reaching that core takes hours and hours of micromanagement and patient trial and error. Newcomers beware.

Patapon 3 is a genre-blending game that lives in a world of its own. You control a small army of eyeball-shaped creatures through rhythmic chants. Each face button plays a different sound, and you combine those sounds to issue commands, like “onward,” “attack,” “retreat,” and more. It's a simple premise that's made more complex by requiring you to stay on beat. Unlike previous games, the chant combinations are always visible at the bottom of the screen. You'll eventually memorize them since there aren't that many, but it helps to have them around early on. The series finally has a pause chant, which lets you stop the battle on beat. But for some inexplicable reason you have to earn this chant by acing the first tutorial level, which isn't as easy as it sounds.

The battles in Patapon3 aren't much different from the previous games. You'll need to read the battlefield and time your commands if you want to succeed. Using the right chant at the right time can turn the tide of a battle in the span of four beats. Every now and then you’ll get in the groove and sink into the thumping beat of battle and it’s incredibly rewarding. The biggest change to the battles is to your army, which now consists of just four guys and a flag carrier. Each member, including your avatar who acts as the commanding hero, can be fitted with different weapons, classes and skills. Weapons and supplies are picked up in battles and you can break down or upgrade them in the armory and blacksmith back at camp.

Above: You’ll spend a good portion of your time looking at tiny text and convoluted stat screens like this one

Don't expect the game to explain any of this, by the way. Aside from some load screens and quick speech bubbles during the optional tutorial stages there's nothing here to guide you. There are tons of things to manage before entering battle: troops, equipment, upgrades, skill trees, and more. Be prepared to spend nearly as much time thumbing through the menus as you do pounding out catchy beats in battle. It almost feels like Patapon 3 was made by two different teams: one handling the addictive foot-tapping strategy combat, the other designing a management system brimming with stat porn. Then when it came time to finish the game, they slapped both systems together and assumed players could figure it out. They assumed too much.

The lack of tutorials and management tips slows the pace to a crawl as you try to decipher the stats and items and how they impact your troops in battle. Your first few hours with Patapon 3 will likely consist of rhythm-based trial and error. You’ll either get frustrated with the endless micromanagement and ditch the game, or you’ll push through and find that underneath the convoluted menu system is a satisfying genre-defying rhythm combat game.

Above: If you can make it past the steep learning curve, you’ll be rewarded with exciting battles against a variety of imaginative creatures

The multiplayer side, which can be played ad hoc and online, is just as deep and mind-numbingly difficult to decipher as the single-player. There are versus matches and co-op campaigns, plus some challenges you need teammates to complete. You can also form a clan and visit another player's blacksmith for special bonuses. This stuff isn't really explained either, so expect to fumble around for a while before having any real fun. Grinding through levels with other players is better than doing it alone, especially since they can help you win some loot that will reduce the tedium of replaying levels early on.

Patapon 3's simple art style and charming toe-tapping music do a lot with a little. The visuals are crisp and charismatic featuring tons of expressive flourishes. Don't let the simple premise and presentation fool you though - this is not a casual game. This is a game that teaches you to swim by tossing you in the deep end. If you have not played a Patapon game before, you'll do yourself a huge favor by starting with one of the earlier games. You can easily pull more than 30 hours out of Patapon 3, which isn’t bad for a $20 game.

Still, it’s hard not to feel like that time would be cut in half if it wasn’t for the needlessly complex micromanagement, the lack of guides, and the reliance on grinding and trial and error. If you’re willing to spend a few hours to teach yourself how the game works, you might just enjoy how the game plays.