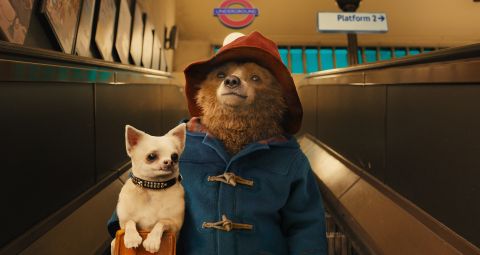 Long-time Paddington Bear fans – whether of Michael Bond's original books or the various TV series it inspired – may find it a little hair-raising to see their ursine hero get a CG make-over for his big-screen debut. Fear not – those rodent-y posters don’t do the new bear in town justice; Paddington’s fur is as intricately rendered as Sully’s in Monsters, Inc. and his hapless character is more akin to Aardman’s all-stars than saccharine Disney critters. (The urge to jazz him up has largely been resisted, although he does, regrettably and inevitably, skateboard at one point.)

Voiced gently by Ben Whishaw, he now has a tragic backstory, arriving in London after an earthquake wrecks his jungle habitat, but harbours no revenge fantasies – those are saved for Nicole Kidman’s Hitchcock blonde-gone-bad, a crazed taxidermist who wants to add Padds to her collection. So it’s significantly more dramatic than of yore (e.g. wallpapering over a door – oopsie!) but the tone and humour are so consistent and engaging it never unsettles.

The strongest moments are when slapstick recalls the antics of Wallace & Gromit, but the script’s packed with quips, ably delivered not just by the inspired parental pairing of Hugh Bonneville and Sally Hawkins (their kids are thinly written, as stroppy or awestruck; Julie Walters’ housekeeper is part Mrs Doubtfire, part Mrs Overall) but also by a sterling supporting cast culled from Peep Show, Spy and Sightseers by ex-Mighty Boosh director Paul King.

Visually, this is a rich world of Heath Robinson-style contraptions (bear-built and human) and best-of-British architecture, from the Browns’ Mansion Tax-tastic Georgian terrace to the splendidly lensed Natural History Museum, with nods to iconic cinema and clichés alike. Paddington has an Odessa Steps stumble and Kidman’s suffers a Tippi Hedren moment, while a taxi ride through central London via all the sights is deftly offset with a knowing gag.

Where family films so often falter, choking on their own contrived sentimentality and/or cool, Paddington is sweet and silly and, at times, edge-of-the-seat stuff.