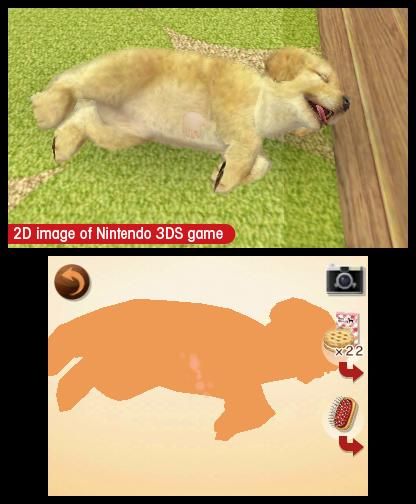 You can’t argue with the appeal of cuteness, at least economically. Back in 2005 when the still new DS needed it most, the handheld received a killer-app with Nintendogs. People all over the world fell for the well-realized digital pups, making it instrumental in DS’s huge success. Of course it was also instrumental in the glut of Petz knock-offs DS owners had to sift through at the local game shop. Now Nintendo is putting out the game’s first actual sequel in the form of Nintendogs + Cats, and the results are a little too familiar.

As the game begins you head to the kennel and are introduced to all the breeds of dog to choose from. N+C launches with three different versions: Toy Poodle, Golden Retriever and French Bulldog, all with their own unique breeds. There are nine specific breeds in each game (the full list is here), and they all have the same three types of cats, which are Tabby, Siamese and Persian. There’s different coloring within the types of dogs, and enough variety to make the one you pick out feel special, though you’ll probably run into the occasional NPC with a similar looking dog.

Once your new fake dog is home, the process of getting to know the new furry friend is remarkably the same to the first game. You pet it with the stylus, feed it, take it for a walk, give it a bath, all the same stuff as before. Of course it looks better now on the new handheld, and spinning the camera around your newly acquired pedigree in 3D is a nice touch, but we found ourselves slipping back into our old routine all too quickly.

Just as before all the interactions are with the stylus, though now your dog is almost always in the wider top screen, leaving the touchscreen filled with silhouettes of what’s happening up above. Aside from than the graphical improvements, other 3DS tech makes this a step up from the original. The new mic is much better at picking up our commands than the one on our DS fat was, it’s a cute bonus seeing your Mii hang out with the pets, and the system’s camera is occasionally used to identify you to your pets. All these tricks are novel the first few times you turn on the game, but the magic eventually wears off.

Of course the biggest addition is right there in the title: cats. Once you take home your first dog, cats are available at the kennel, but they aren’t cheap. Once you take the feline home, you see that they have distinct personalities and behavior from the dogs, but that mostly holds them back from being fun in a gaming sense. You can pet and feed them, but they can be aloof and don’t listen most of the time. Plus you can’t really take them anywhere out of house for things like competitions, which makes sense when designing cats, but it also makes them superfluous to the canine stars.

You can dress both cats and dogs up with multiple cute accessories if that’s your thing, including some Nintendo related ones (Mario hats for example) using some of the AR Cards that come with the system. But for that you’re going to need money, which you earn primarily through talent contests. Improving you and your dog’s skills at events like Lure Coursing and Disc (meaning Frisbee) Competition isn’t easy and it was at this point the game started feeling more tedious than fun and relaxing. The challenges aren’t impossible to figure out, but as we practiced techniques, we began wondering what other games we could be playing instead.

Sometimes Nintendogs + Cats can feel like homework, and other times it can be a sweet little distraction where you spend time with adorably well-realized puppies and accurately uninterested cats. If you loved the first Nintendogs and are cool with an unambitious sequel, then this is a fine choice among the first batch of 3DS games. However, many players will be disappointed that Nintendo waited so long to make a follow-up and this was all the devs came up with.