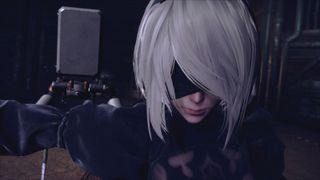 Warning: This feature explores the themes presented in Nier: Automata's true ending - and in order to aptly describe those themes, I'll be summarizing a good chunk of not only the ending, but the entire plot. In short: THE BIGGEST OF SPOILERS LIE AHEAD.

Nier: Automata has a PSN Trophy dedicated to those who try to peek up heroine 2B's skirt 10 times, and a semi-secret method that lets you remove the skirt entirely. It's got big swords and bigger boss fights. As far as "games that will make you rethink your life" go, it probably doesn't rank very high on your list - maybe just above Onechanbara: Bikini Samurai Squad. That's certainly what I thought.

At least, it was until I experienced the game's "true" ending, and felt something I hadn't felt in a long time: optimism.

Earlier this year, I was diagnosed with clinical anxiety and depression. This mental illness can manifest itself in a variety of ways, from restless and racing thoughts to pessimism and irritability. For me, depression keeps me from being able to fully experience any emotion, good or bad. I would look outside on a beautiful, sunny day and find myself unable to enjoy it. I would think suicidal thoughts, but not feel sad about them.

It sounds silly, but because of my depression, I saw a lot of myself in 2B's sidekick, the male android called 9S.

When we first meet him, 9S is cheery, if a bit by-the-books. He doesn't question the orders he's given; as a member of the organization known as YoRHa, it's his duty to fight alien machines so humans can reclaim Earth. But over the course of the game, 9S discovers a horrifying truth: humanity is extinct, and indeed has been for some time.

His entire life is revealed to be an endless cycle of death without purpose. He has fought the machines - and died doing so - countless times before, and unless he does something, this will continue for countless times into the future. His gods long since dead, 9S vows to break the cycle and destroy everything, including himself. He goes from an enthusiastic helper to a jaded cynic who sees no point in living.

On my worst days, my depression tells me there's no point. It says there is no god, and no reason to continue living. And that's why I'm going to talk about Automata's bullet-hell mini-game now.

Weird transition? You bet. But this is a game featuring robots who quote Jean-Paul Sartre and androgynous machines named Adam and Eve that debate the usefulness of underwear. You're just gonna have to roll with it. Besides, I promise it'll make sense in a moment.

The true end of Automata is structured as a top-down shooter, where you must destroy the game's very credits as they fire a flood of projectiles at you. The idea is that you are defying the cycle of death and rebirth in order to save 2B, 9S, and another android named A2's memories. It's a long, grueling sequence, and you're bound to fail.

You die, but instead of simply proceeding to a continue screen, the game asks you questions. "Give up here?" The implication is clear; are you going to quit so close to the finish line? You die again. It asks, "Do you accept defeat?" As the game asks you these questions, messages from other players who have completed the game begin to appear, cheering you on. "I'm rooting for you!" "Don't give up!" "Put your back into it!" But those messages can only ease the frustration so much. There's just no winning. There's just no way. It's impossible.

You die again and again, until the questions become more pointed. "Do you think games are silly little things?" "Is it all pointless?" And finally, "Do you admit there is no meaning to this world?"

When that question popped up on my screen, I thought back on all the times just in the previous week that I had told myself there was no purpose, no meaning to existence. Every time I decided that feeling nothing was better than feeling let down, I was choosing yes. Every time I thought "the world would be better off without me," I was choosing yes. And here I was, being asked point-blank if that was my honest opinion. But I didn't say yes to Automata's question. I hesitated, to be sure. I certainly thought about giving up. But I didn't.

I was curious; I wanted to see what came next. I was angry, too; I saw this text prompt and thought "how dare you keep me from the ending." And for a moment I was reflective; I considered the weight of my depression and what I had been going through.

The next time I respawned, the game informed me that I'd received an offer of help. One by one my icon became surrounded by other icons, representing players from around the world who'd beaten the game and voluntarily sacrificed their save data to help a stranger. The background music shifted from a single voice to an inspiring chorus. With my new friends acting as both a shield and increasing my own firepower, I was able to achieve Automata's true ending.

You don't have to be an artificial human capable of lightning-fast computations to see the parallels. In spite of all my fears and doubts, I had to choose that life was worth living. I had to accept help. Granted, my version of events involved going to a therapist's office instead of firing lasers at floating game credits while they shot energy balls at me, but I feel like the similarities outweigh the differences here.

When all was said and done, 2B, 9S, and A2 were free to choose how they lived their lives. And, I realized, so was I.