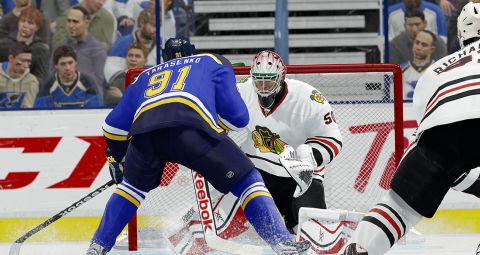 Strong on-ice gameplay and terrific multiplayer are offset by a lack of innovative modes. While this is a solid rebound from a shaky next-gen debut, NHL 16 still has work to do to regain greatness.

Hockey fans sent EA’s NHL series next-gen debut to the penalty box when it landed last year. Beloved modes were missing and gameplay was wanting, and the fans’ reaction was predictably cranky. EA Canada took notice, brushed themselves off after blistering fan and critical reactions, and spent the next year packing as much into this season’s version as possible. The results are immediately noticeable - and mostly positive. While the NHL series is not all the way back to its glory day levels, NHL 16 is a strong step forward and - most importantly - an enjoyable game to play.

The best parts of NHL 16 jump off the screen. Arenas are filled with raucous fans shouting team-specific chants, mascots mill about and react to the action on the ice, and a near-palpable electricity permeates the air. The sounds of skates pushing through ice, pucks clanking off goalposts, and players slamming into the boards are superb. Horns boom with an eardrum-bursting din when goals are scored, with spectators reacting instantaneously with ecstasy or agony, depending on their affiliation.

A number of key adjustments have been made to on-ice gameplay, yet some remains familiar. Checking is tuned way down, so the big, bone-crushing hits that were once the series’ hallmark have been replaced by more subtle shuffles. Fights, on the other hand, remain as rough-and-tumble as ever, with players skating away from a fracas bruised and bloodied. While NHL does a nice job offering a variety of ways to get a goal - stuffing in rebounds, deflecting passes in the slot, or blasting slapshots from the point - the tried-and-true methods for scoring remain. Unchallenged wraparounds or the famous “skate-across-the-slot-then-aim-top-shelf-opposite-direction” move, while not completely guaranteed, are still the best recipe for a point. Defensive AI is pretty good at running you off the puck, though, and bumping up the difficulty from Pro to All-Star will present a huge challenge to anyone that’s not an expert.

Job of the HUT

Hockey Ultimate Team continues to be an enjoyable alternative to the tried-and-true franchise and career modes. The inclusion of offline season games dramatically improves the experience for newcomers, allowing you to tinker with your fantasy team without the pressures of a live, online battle versus a human. Other subtle improvements, such as improved menus and more visual aids about player relationships to each other, make HUT a more welcoming experience; however, it still has its own language and mechanics that take time and patience to learn.

This is also the best NHL for newcomers. In standard single player modes, an ingenious system gives you visual cues to important info - open or blocked passing lanes, a good time to deke or shoot, whether to take a slap shot or wrister, for example - that even veteran players can appreciate. A solid set of tutorials will put you in a great position to understand the depth of the controls, which are significant.

No simulation-style sports game is better at multiplayer than NHL 16, either, whether you’re playing with or against friends. The combination of quick-playing games that last 20 minutes or less and a hectic, back-and-forth pace is a recipe for delight. Battling a pal at or around the same skill level is a sublime experience jammed with tense moments. Almost every game I played against friends came down to a single goal difference; you are rewarded for playing smart and punished for doing risky moves that don’t pay off. Whether it’s couch co-op or online, multiplayer is a blast.

NHL 16’s issues are numerous, though. In practice, there seems to be very little difference between teams other than their jerseys; individual player ratings are so relatively close to each other that they feel virtually irrelevant. Hockey has always been the toughest sport in which to represent specific athlete talents, and I’m as hard-pressed as ever to distinguish one player from another unless I’m looking at them close-up between shifts.

More than that, however, is the “been there-done that” feeling with the available modes. The obligatory franchise-running Be A GM and single-player Be A Pro (along with Ultimate Team) make up the core of the offerings, and while they are both deeper than last year’s versions, there’s really very little that is exciting about them. I understand that it’s a good idea to flesh out these tried-and-true ways to play before testing experimental new modes. However, the prospects of grinding through an 82-game campaign or multi-season career with my created player for the umpteenth straight year without much new to experience aren’t especially appealing. Even worse, there are no online leagues or tournaments, a sad remnant of the next-gen cuts that were made last season.

Luckily, the beloved EA Sports Hockey League mode that returns after a one-year hiatus makes up for much of that. The ability to play on your own club with your friends in organized monthly leagues is a joy - as long as the servers are working - and the new move to use player classes instead of leveling your guys up is wonderful. No longer will you see a bunch of 99-rated 7-foot monsters facing you; instead, you have to choose between snipers, tough guys, and a host of other archetypes to find the best combinations to suit your style. Hockey lends itself to cooperative play thanks to the relatively small number of people on the ice and the speed of the game. For many fans, EASHL is all they’ll really play this year (myself included).

NHL 16 is the game that traditional fans of the franchise can be happy with for the season, and it does a nice job of putting the series back in a positive place. After all, anyone can have a bad year. Now that the foundation has been rebuilt, it will be fascinating to see where the development team takes it next. NHL will need to continue to step up its game with fresh, exciting new experiences to keep its audience engaged moving forward.

Strong on-ice gameplay and terrific multiplayer are offset by a lack of innovative modes. While this is a solid rebound from a shaky next-gen debut, NHL 16 still has work to do to regain greatness.