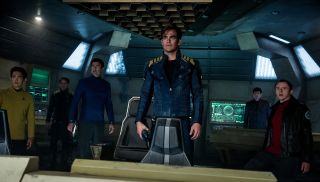 It looked like we had the final trailer for Star Trek Beyond a few weeks back, but apparently that was a warm-up. Paramount has unleashed the final FINAL trailer for Justin Lin's sequel mere days before it hits theaters, teasing bigger, showier setpieces and some crazy stunts with the Enterprise:

Unlike the earlier trailers, Kirk's daddy issues take a back seat for a pretty action-packed minute. While it might have been cool to see more of that element - especially now that Chris Hemsworth is returning as Papa Kirk for Star Trek 4 - this last preview doesn't really need it. It's all about the action.

The crew let rip some killer one-liners (Scotty and Sulu in particular) while avoiding the chaos brought about by Idris Elba's villainous Krall. It's a fun shot in the arm to get you prepped for opening weekend, a huge contrast to last month's earnest trailer. Hopefully the finished product will land somewhere between the two. If early audience reactions are anything to go by, it absolutely will.