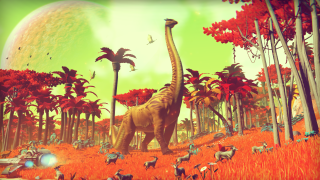 No Man's Sky is a bit of a mystery at the moment. We know that you can fly around a procedurally-generated galaxy, landing on and exploring a plethora of planets, but beyond that, quite a few details are still unknown. Now that we're getting closer to the game's August 9 release date however, we're getting helpful trailers like this one, which serve as both introduction to and tour of No Man's Sky's universe.

If you want to dig deeper into the four pillars that define No Man's Sky - those pillars being "explore," "fight," "trade," and "survive" - I suggest checking out the more in-depth videos that PlayStation has been posting in the lead-up to launch: