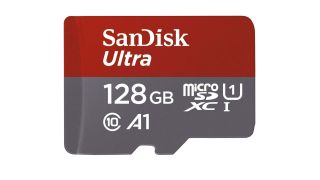 You can never have enough Nintendo Switch storage space, that’s my motto. With Super Smash Bros. Ultimate just two weeks (!) away, you might be a little short of room on your console thanks to its 32 GB storage space – which is where this super fast 128 GB SanDisk 100MB/s comes in. At only £14.99 (a saving of 57%), you’ll have to act fast to get in on Amazon’s Lightning Deal. Once you’ve bought it, don’t forget to check out the Cyber Monday Nintendo deals now you’ve got space an extra dozen (or more) Nintendo titles.

Wanna know how great this is? Nintendo doesn’t put its name to just anything. With the Nintendo Switch embossed on the card itself, you’ll never have to worry about knowing which card is for which device. This is Nintendo Switch all the way through. There’s the trademark Nintendo gold seal there, too, for that extra degree of authenticity. Who knew a MicroSD card could look so beautiful?

SanDisk MicroSD for Nintendo Switch 128 GB £14.99 (down from £35.02 for Black Friday only)
With Super Smash Bros. Ultimate on the horizon, quadruple your storage space and never have to worry about rotating games on your console ever again.View Deal

Even better: It’s super simple to use. Just pop it in the storage slot in your Nintendo Switch and, hey presto, you’ve now quadrupled your Switch storage. Easy as that. All for just under £15. It’s a bargain, to be sure. That 100MB/s rate also lets you load games extremely quickly also, meaning you’ll never be sat twiddling your thumbs when, instead, you can be firing up Super Mario Odyssey or some of the other best Nintendo Switch games. It’s fast, it’s easy-to-use, and it’s Nintendo. What more could you want?

But there’s barely any time to even be reading this. The deal ends tonight on Black Friday, November 23, at 11pm GMT. You’d better snap one up before they’re gone at this price for good.