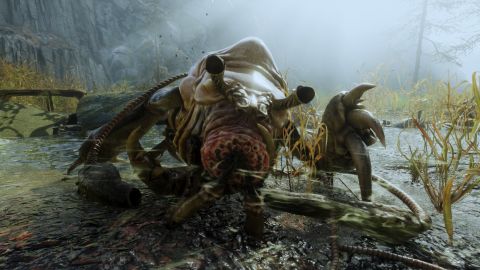 A first-person survival shooter that's as engrossing as it is unnerving, Metro Exodus tells a powerfully human story in a world that's equal parts style and substance.

Metro Exodus is not a gigantic, seamless open-world game. It's a focused, segmented first-person shooter that gets increasingly linear as you progress. It's much more open than previous Metro games and it does have some chunky environments for you to explore, but it is not the same kind of sandbox survival experience as, say, Fallout 4 - and it isn't trying to be. It is, however, fantastic. Metro Exodus blends the survival elements and carefully constructed levels that the Metro series is known for with a dynamic world that's as beautiful as it is dangerous, to stunning results. You can see that in action in our video review below.

Where previous Metro games took place in the titular underground rail system, Metro Exodus takes players to the surface as protagonist Artyom and his fellow Spartan soldiers - including his wife Anna and her father Colonel Miller - chart a course across an irradiated Russia aboard the Aurora locomotive. Their journey starts in spring and stretches into the depths of winter, and each season ushers in a totally new area. The biggest maps in the game, the Volga and the dried-out Caspian Sea, are peppered with side stuff. Contrastingly, the forested, autumnal Taiga feels like a sightseeing tour on a more guided mission. I poked around a few buildings in the Taiga, but I pretty much stuck to the path laid out for me by the main objectives.

The final wintry area is even more linear and feels much like Metro 2033 - not that that's a point against it. Metro Exodus' story missions present a staggering variety of set pieces - like shooting giant sea slugs from a paddle boat, mowing down mutant spiders in an underground bunker, or fleeing from a pack of wolves through a dimly lit forest - and they introduce new enemies and characters at a healthy pace. The open-world activities and the structured missions also flow together surprisingly well. One mission required me to ride some railroad machinery through a bandit camp, and I was delighted to find it was the same camp I cleared out while exploring the area earlier. It's impressive how well the traditional missions hold up considering how fleshed-out the larger environments are.

One hell of a road trip

That said, for me the Caspian Sea and the Volga were the high points of the game. As you'd expect from a tundra and a desert, they play very differently. The icy Volga is stalked by dog-like Watchers, giant carnivorous shrimp, and all manner of ghouls, whereas the sandy Caspian Sea features enormous bats called gargoyles, packs of oversized mole rats, and some of the scariest spiders to ever scurry in the dark. The human inhabitants are wildly different, too. The post-war acolytes of the Volga equate technology to Satan and are none too fond of you, but power-hungry slavers rule the Caspian Sea. They feel like totally different worlds, and they're both filled with fun things to do and interesting characters to meet.

Main objectives and some optional ones are automatically marked on the map, but there are also plenty of surprises hidden in Metro Exodus. I have fond memories of running into a talkative hermit in the bowels of a spider-infested shipwreck, for example. And even when things are marked for me, I enjoy deciding how and when to handle them.

Sure, I could immediately head for the passenger train car we need to continue our journey, but those mutant-infested ruins are on the way there. Oh, and I may as well scope out that safehouse in the distance - the last one I found was loaded with supplies and located right next to a new gizmo for my kit. I also managed to scrounge up enough scrap metal to craft some more shotgun shells, and I desperately need to clean my guns and repair my gas mask, so I should plop down at a crafting bench while I'm there. Come to think of it, mutants are more active at night, so I'll avail myself to the safehouse bed and wait for sunrise. Wouldn't want to waste bullets.

The combat itself is a varied mix of rock-solid gunplay and tense stealth missions, and I enjoyed both sides. I went with the tried-and-true Dishonored approach: go in stealthily whenever possible, but open fire when stealth is too much of a hassle. Metro Exodus does stealth pretty well - which is to say, it doesn't instantly go to hell the second one guard spots your big toe - but what can I say, I can only load a checkpoint so many times before my trigger finger gets itchy. At the same time, there's nothing quite like chewing through a horde of mutants with a freshly upgraded shotgun.

Speaking of which, while the weapon upgrade system is incredibly simple and largely driven by the guns you recover from downed enemies rather than components found while exploring, it works well with Metro's formula. I'm basically just using whatever weapon part gives the best stats, but it's still fun to improve my arsenal. I'd say the same for the general crafting system used for medkits, ammo, mask filters, and other handy items. This system is fueled by what I've dubbed scrap materials and science materials, which can be found all over the place. Again, it's a simple system but it gets the job done.

Keeping up with all this crafting stuff - on top of charging my flashlight, cleaning my guns to keep them from jamming, and monitoring the local radiation levels - lends a tremendous sense of immersion to Metro Exodus. After my first long play session, I stood up from my computer, noticed it had gotten dark out, and felt a very real urge to charge the flashlight that I, Austin Wood, who is distinctly not Artyom, don't actually own in real life. I haven't been able to laugh at myself for stupidly thinking to do some in-game stuff in real life in ages. Not many games draw me in like that.

Scavenging for supplies, upgrading and maintaining my gear, and ticking off items on the to-do list I set for myself never got old in the 20 hours it took me to beat Metro Exodus on normal difficulty. I love how responsive its world is, how organic it feels. The nuclear war that started all this essentially reset humanity, and it's fascinating to see how people in different regions choose to live in this new, ruined world. There's no shortage of madmen, but there are also people with actual morals, and it is so nice to play a post-apocalyptic shooter where everyone I meet isn't a stupid bandit wearing half a bear and most of a lawnmower.

When I lower my weapon before approaching a group of survivors, they thank me for my show of peace. When I go out of my way to retrieve a souvenir for one of the Aurora's members, they're visibly overjoyed - as I am when I later see them using it in the Aurora's passenger car. When I put other survivors ahead of my immediate mission, Anna thanks me for my kindness. I can see the change I bring to the world and it feels like my actions matter. It also helps that the game is a joy just to be in. Gone are the days of snow and steel. Welcome to a new, prettier Metro.

After spending two games in tunnels, the jump to the open environments of Metro Exodus is a refreshing change - and for Artyom and the gang, it's a daunting one. Not long ago, they were convinced the surface was uninhabitable, yet here they are chasing the horizon by the seat of their pants. They don't even know what the world is like nowadays, let alone what they want to do in it. They need information and a place to settle, and they're constantly running low on supplies. Their journey takes them through the best and worst the world has to offer, and by god does it have a lot to offer. Metro Exodus is at once comfortingly familiar and a massive step forward for the series, both in terms of how it plays and how it tells its stories. It's not only the best Metro game yet, it's one of the best shooters I've played in years.

A first-person survival shooter that's as engrossing as it is unnerving, Metro Exodus tells a powerfully human story in a world that's equal parts style and substance.