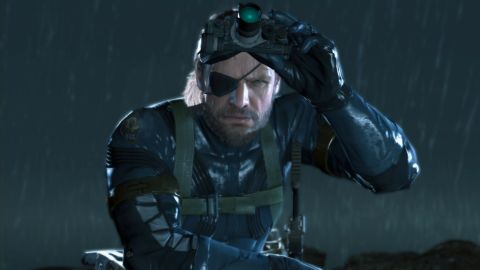 I’m more of an expert on Burger King than French cuisine, but the culinary concept of an “amuse-bouche” certainly applies to Metal Gear Solid 5: Ground Zeroes. An amuse-bouche is a small sample served, as Wikipedia puts it, “both to prepare the guest for the meal and to offer a glimpse into the chef's approach to the art of cuisine.” Ground Zeroes is a similar glimpse of all the impressive ways Metal Gear is growing and evolving, meant to prepare gamers for what’s to come. Unfortunately, this delectable morsel isn’t cheap, and comes with the painful knowledge that it’ll be a long wait before the actual meal arrives. Better ask for more bread.

From the start, Snake plays better than ever in Ground Zeroes, thanks to Konami excising the many gameplay hang-ups he’d cultivated in past titles. The changes are evident with your first steps into a 1975 version of Guantanamo, a military prison full of hostile operatives. From grabbing an enemy from behind a wall to shooting a goon from afar with a tranquilizer dart, movement feels natural. Snake's animations are better than ever, making his actions seem far more realistic than they were in the past. Direct visual cues make it clear when you’re in danger of getting caught--no intrusive HUD, lengthy conversations, or vision cones needed.

Adapting to the new style is easy because Ground Zeroes does a great job of incentivizing learning its new systems. For example, you should scan an area with your binoculars to spot exciting combat opportunities, but now the benefits of doing so are easier to see. Scouting enemies from afar gives them an outline in your newly enhanced view (think Batman’s Detective Mode or Assassin’s Creed’s Eagle Vision). This, along with other modern features like auto-lock aiming, bullet time-style slow motion, and regenerating health, succeeds in making it feel as though the franchise is evolving without abandoning Metal Gear’s unique charm.

The price of war

This vision of Snake’s future doesn’t come cheap. PS4/Xbox One versions will run you $29.99/£29.99 and the same goes for the PS3/360 physical copies, though last-gen digital runs you $19.99/£19.99. That's about half the price of a normal retail release, but Ground Zeroes is only a fraction of the length of your average Metal Gear game.

One thing Metal Gear hasn’t left behind is its gift for storytelling, and Ground Zeroes makes impressive improvements in that department too. You’re no longer forced to pause the action for lengthy CODEC conversations, while the cinematics’ camera has more dynamic movement that’s sweetened by clever audio trickery. As for MGS’s convoluted history, Ground Zeroes lays the groundwork well in the opening so you don’t need to memorize an entire Wikipedia to understand it.

This is all in service of a narrative that doesn't shy away from grisly but necessary scenes important to the plot. It approaches dicey topics like state sanctioned torture, illegal rendition, and other horrors of war that most games won’t touch. It's a risky move, the downside being that Ground Zeroes doesn't pull off every aspect with a enough of nuance or subtly.

Snake’s newest mission gives players a lot of room to breathe with an open world map that’s an inviting playground for him to try out his new skills. Guantanamo is a barren camp, and the contrast between the craggy rocks with the bright searchlights makes it obvious where you need to hide, showing that a sandbox style can enhance the sneaking instead of hurting it. The area feels alive, with jeeps making deliveries around the base and guards participating in brief conversations. Metal Gear’s gameplay is all about giving players choice, and the open world leaves you with many more options to complete objectives than you've previously had. It’s also worth noting just how good Ground Zeroes’ big, open world looks on PS4/Xbox One. The textures of the terrain and clothing are some of the most next-gen I’ve seen yet on the fledgling consoles.

Ground Zeroes shows incredible promise for the future of Metal Gear--but just as you get pulled in, it just... ends. The first playthrough of Snake’s one and only mission takes about two hours, and that includes a couple lengthy cutscenes. It feels like a long-ish prologue or tutorial stage to an amazing game, teasing potential that never pays off thanks to Ground Zeroes’ brevity. I can accept a great-but-short game if it’s a full experience, but Snake’s mission amounts to a demo of the real Metal Gear Solid 5 that’s coming months later.

It's a realization made all the more obvious by Ground Zeroes' attempt at recycling its content in fresh ways. One side mission is a daylight search-and-destroy operation, another is an on-rails shooter, and both Sony's and Microsoft's editions come with cute bonus missions that make the unlockables worth searching out. While these extras effectively show how flexible the series' new engine is, they're ultimately more harmful in that they make Guantanamo feel much smaller and boring than it did at the outset.

In another reality, Ground Zeroes is astoundingly good free demo. It expertly showcases Metal Gear's new direction and will hype fans for what's to come, but in the end it's a costly glimpse of the future. MGS diehards that can’t bear waiting for the next game will devour this appetizer, but the curious should be prepared for how unfulfilled Ground Zeroes’ small portions will leave them.