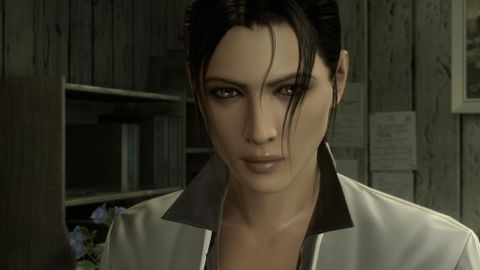 Metal Gear Solid 4 is a masterpiece, arguably the best in the series and – though many will fiercely disagree – ever so slightly disappointing. About 40% through, our notepad was scarred with breathless superlatives like 'Genius', 'Amazing' and 'Wow!!!' but by the game's conclusion, they'd given way to considered criticism and stark cries of 'WTF?'. Will you enjoy it? Yes, definitely, but while most hardcore fans will adore it, a tiny minority may be left slightly deflated by the weight of their expectations, despite the game's unarguable quality.

First, a disclaimer: this isn't a 'standard' review. Kojima Productions are so obsessed with spoilers, there's a two page document outlining what we can't say, covering basic plot developments, plus a bullet-point list of forbidden items. Restrictive? Certainly, so excuse the lack of detail. There's also insufficient room, or merit, in explaining control nuances, or button presses. Note that we've finished MGS4 twice: once on 95% complete code in Japan, and again on retail code – trust us, no one's played it more.

Oddly, we liked it more second time around – cut-scenes we initially hated reveal self-referential depth that borders on third-level genius. Or perhaps we're over-thinking it. And that's MGS4's triumph – the game is so layered, the question isn't whether you should buy it, but how you'll debate it when the credits finally roll on gaming's most philosophical, frustrating and inspired series.

MGS4 operates on so many levels, it's easy to forget the dumbest of all – as a beautiful-looking, gung-ho shoot-'em-up. On one hand, it's a game where a likeable, ageing soldier shoots countless enemies in some of the most exciting console action sequences ever; on the other, a meditation on war, society, politics, technology and, well, everything.

The game's so rich and contentious, we've had five separate 30-minute discussions about MGS4's merits and failings. One journalist, who played the game stone-faced, turned around at the end and blurted "I think it's amazing", waxing lyrical about how Producer Hideo Kojima is the master of the medium, and how all talk of Kojima being a frustrated film director is rubbish. Another reviewer, a former film student who'd studied scriptwriting, tore into the wasteful dialogue, despite conceding the game's overall quality. Another, like us, was mumbling about giving the game a perfect '10' for two days, but was so incensed by the final act, he wanted to slash the score and physically confront Kojima.

Our problem? The game doesn't conclude on an emotional swell, but fades out in a way that makes the 'Gandalf on a boat' finale to Lord Of The Rings: Return Of The King look like flash-frame editing. Some themes from the early trailers – like Snake choking on his pistol, aren't fully developed, and appear almost in obligation. Kojima has to resolve too many character arcs and plot threads, so the conclusion feels like it's happening around you, rather than *through* you. Given that it's the last chapter in our favourite game series ever, we expected to be moved to tears – but it's got far less impact than, say, the intensely personal, shocking ending of Half Life: Episode 2.