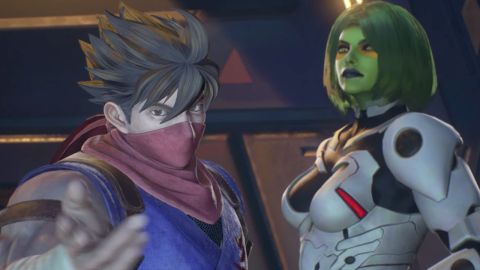 Marvel vs Capcom: Infinite has a solid core and Infinity Stones make fights tactical. If only it didn't have to live up to the expectations set by its excellent predecessors.

Street Fighter may have the most esteemed legacy and tightest controls, Tekken may be the best at depicting close-up brawls, but few fighting games rival the mayhem and excitement inherent in the Marvel vs Capcom series. Larger-than-life heroes and villains alike toss out punches that can shatter buildings, flaming swords, energy beams, and impossibly fast combos that pummel foes. And of course, it's all being done by fan-favorites, the cream of the crop. No D-listers like 3-D Man or Lost Planet protagonists allowed.

Should you choose to play Marvel vs Capcom: Infinite, you'll find an experience that is aware of these things; a familiar setup, if only just so.

Infinite is noticeably slower and less bombastic than its predecessors. You won't be launching foes 20 feet into the air, chasing after them, slamming them into the ground so that they bounce back up as you switch to a new character, and then continuing the onslaught, as you could in Marvel vs Capcom 3. You also can't call in characters for one-off assist attacks, a staple of the series up until now. Infinite's fights are more grounded, and the game feels more like a 1v1 fighter with a tag team option than the chaotic battle royale of previous entries. That's not necessarily a bad thing - if it is a 1v1 fighter, it's a solidly-build one - but it's also not what fans have come to expect.

Marvel vs Capcom: Infinite also trades out the Light, Medium, Heavy, Special control scheme for Light Punch, Heavy Punch, Light Kick, Heavy Kick. You can also just keep tapping Light Punch to pull off a basic combo, regardless of character. In fact, several combos are universal across the roster; coupled with the fact that it's not as easy in Infinite to pull off the cool, character-specific moves in the middle of a beatdown as it was in previous entries, these fighters feel less exciting as a result.

50 best movie fights of all time

While the button inputs may not vary greatly from fighter to fighter, tactics will. There's no two fighters you could criticize as being too similar to each other. Whether you're playing as the teeny tiny Rocket Raccoon or the hulking... er, Hulk, you'll feel the difference immediately. And of course, this will change how you play. You can't just rush an opponent and try to overwhelm them with a slow, heavy character like Thanos - you'll need to take your time and be watchful of your foe's every movement. Or, you could compensate for the Mad Titan's short reach and heavily-telegraphed attacks by equipping a suitable Infinity Stone.

Yes, the Infinity Stones, which have been a central focus of the Marvel Cinematic Universe, have made their way to the Marvel vs Capcom series, and each one supports a different type of playstyle. You can activate a short burst of your Infinity Stone's power, or enter a special mode if its gauge has been filled to a certain point. These stones are said to wield immense power in the Marvel universe, and in MvC: Infinite, they're no different.

From imprisoning your opponents in a cube to letting you revive a fallen friend, these colorful gems are capable of turning a fight around or - if held in competent hands - ensuring a quick and merciless victory. They're a worthwhile addition, and don't feel like a gimmick you won't take advantage of. Some of my closest fights were only won thanks to the power boost these stones provided.

The MCU > everyone and everything else

They are, however, emblematic of a very real issue permeating throughout all of Infinite: the noticeably MCU-friendly tone. The official game's title is Marvel vs Capcom: Infinite, but it really could have been "MCU Heroes Boss Around Capcom Sidekicks: The Fighting Game" - though I guess that would be pretty long to fit on the box. There are no X-Men characters, nor any torn from the pages of Fantastic Four, and Deadpool has also been axed. These are some of Marvel's most popular characters, and to not include them feels wrong.

The story is serviceable, but lacks a sense of drama or gravitas. It also gives Marvel characters the star treatment while relegating Capcom heroes to sidekicks and helping hands. Almost every action is driven or decided on by a Marvel character, typically Captain America or Iron Man, while some Capcom lackey will do little more than cheer on their teammates. Jedah from the Darkstalkers franchise is one of the pleasant exceptions, as he plays one of the game's primary antagonists.

There's never been this much focus on the single-player experience before and crossovers are tricky to handle, but Infinite rarely makes satisfactory justification for its own team-ups or face-offs, and so there's a lack of both engagement and pay-off.

Character models are as unappealing as they were in the demo that was released earlier this year (though Chun Li has at least received a visual upgrade). Those who wear armor or full-body suits look solid, while humans with skin showing come across looking like soulless husks. The realistic textures and shadows combined with highly-saturated colors and environments feels uncomfortable. It's less bothersome in the midst of a fight since fighters contrast well with the game's stages, but my tag-team's intro and victory poses caused me to cringe when I would've rather been grinning.

Infinite is a well-constructed, mechanically-responsive game. It doesn't feel sloppy or inaccurate, it's just... not very exciting. There's a lack of finesse to the presentation that makes everything feel Good Enough, but not more than that. Contrasted against the flashy cel-shaded art direction and over-the-top tone of Marvel vs Capcom 3, or the silky smooth sprites and technical precision of Marvel vs Capcom 2, Infinite feels like it's just content to exist.

In its genre, Infinite is perfectly adequate - even when it diverges significantly from the franchise's established formula. But in the shadow of its own pedigree, it falls hopelessly short.

Marvel vs Capcom: Infinite has a solid core and Infinity Stones make fights tactical. If only it didn't have to live up to the expectations set by its excellent predecessors.