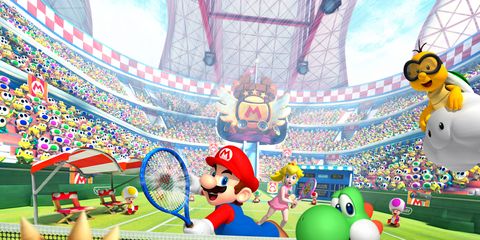 Mario and his friends have been trying their fat, cartoony hands at a number of different sports and activities for years, though it’s generally agreed that Camelot Software’s Mario Tennis franchise is near the top. Yet despite its popularity the series skipped over the DS entirely, so it’s no wonder that the buzz surrounding the 3DS iteration, Mario Tennis Open, had an air of excitement since it was first announced. It has been nearly seven years since Mario gripped a tennis racket, and to fans, that’s seven years too many.

The basic gameplay isn’t drastically different from past iterations – and it really shouldn’t be. Mario, Princess Peach, Bowser, Boo, and a handful of other mascots each take to the court with their own style, leading to a fair amount of intricacies to learn and perfect. Each button on the controller activates a slightly different hit, with some combinations lobbing or a dropping shot, and different power-ups (it is, after all, a Mario game) appearing on the ground throughout the match.

If this sounds a little complicated that’s because it is, but having all of the commands on the bottom screen (both for reference and optional touch support) makes it much simpler. The bottom screen with also lights up the “correct” hit to use for each situation, lending additional accessibility for those uninitiated with Mario Tennis, or even regular tennis for that matter.

Another option – to lift the system up and activate a third-person mode – is also available, though we never really got the hang of it. When in this mode the game takes control of the player’s movement, and we didn’t always feel like it was going in the right direction. It was possible to override it, but the third-person perspective is more limiting, and automatically disables 3D, making it even less useful (even if the 3D-support in Open is actually lackluster). What’s more, this angle needs to be disabled from a buried options menu – if you simply switch it off from within the game it resets every time the system is rebooted. It’s a strange design choice, and one that led to unnecessary frustration for some time.

But with that option off, we found some fun in going through the different cups in Mario Tennis Open. They’re not all that varied, only being spiced up with the addition of slightly-different courses and additional sets, but they’re still enjoyable, and can provide a healthy dose of difficulty on the harder modes. Camelot also included single-cartridge multiplayer and support for online with two to four players, which functioned well in all of our tests despite some minor lag.

Padding out the package is the inclusion of Mii support, with unlockable items, and a few minigame modes. These modes are fun in short bursts, letting you knock the Tennis ball through rings, volley in space with one of Mario Galaxy’s star-shaped Luma, or to essentially play the original Super Mario Bros. with a tennis ball, and they all unlock more coins to be spent further upgrading your Mii.

Problem is… that’s literally all there is to the game. There are a few cups, a healthy handful of characters, some mini-games, and that’s it. There’s roughly the same amount of content that there was in Mario Kart 7, except instead of having over a dozen different tracks adding flavor, variation, and personality to the game, there are a few different courts that play roughly the same. Mario Tennis is known both for its fantastic gameplay and its moderately-lengthy singleplayer mode, but Mario Tennis Open omits this entirely, opting instead to leave a giant, gaping hole where the singleplayer should have been.

Even those unfamiliar with this missing feature will still feel its absence. It isn’t just a slight annoyance – it’s somewhat detrimental to the actual overall product. Without it, there’s simply not that much variety of content. Playing against Baby Bowser on the Mario Stadium court feels almost identical to playing against Wario on the Penguin Iceberg court. Every match feels… just about the same, and it gets old pretty fast unless you have some people to play against.

Mario Tennis Open is technically sound, and with a few friends, there’s definitely some competitive fun to be found. If you're willing to deal with the lack of a true singleplayer experience (beyond competing against AI opponents for cups) you'll likely enjoy yourself, though the omission definitively feels like a tremendous missed opportunity. Online multiplayer is a good addition, but it just needs more than that. So, to put it in tennis terms, it's not really a foul, but it's definitely close to the painted line.