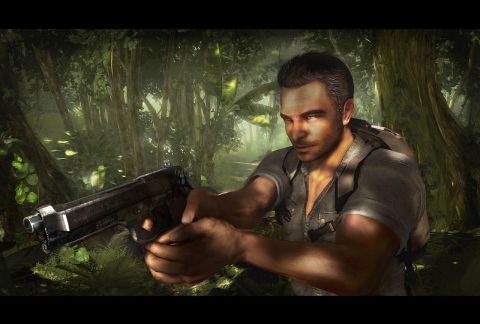 Which crash survivor of the Oceanic 815 willwe choose to be? Jack? Nah, he’s too boring. Hurley? Hmm, he’s a bit slow. Ooh,we could be Locke... wait, what?We can’t be one of the stars? In fact,we don’t get any choice?We're an extra?

That’s the peril of making an official game for a show like Lost: the show’s canon is so well-protected they’ve had to create a new character. Thus, this is a third-person adventure using that well-worn cliché of amnesia.

You’re a photo-journalist (cliché again) trying to fill in your memory. Your time is spent on the fringes of the show’s plot, never making an impact and turning up like Agent Scully just after everything has happened. Season One’s amazing finale where the island dwellers pop open the mysterious hatch in the jungle? Via Domus sticks you on the beach and shows a cutscene of a distant explosion. You don’t really get the appeal of a Lost game, do you, Ubisoft? People kind of want to see those things up close. Maybe even be a part of them.

Following the show’s main plot device, you’re left at the mercy of flashbacks to fill out your character’s empty shell of a brain. One of the first takes place not long after the crash: you need to get to the plane’s cockpit to reclaim your camera, deep in the jungle, but Jack isn’t allowing you to pass. Cue a flashback to fill in a chunk of your memory, where a girl you knew snuck past a fisherman by lying to him. So how do you get past Jack? You use your newly found lying skills to tell him someone’s fainted wayyyyy over there and he leaves his post. You have to learn lying? Come on.