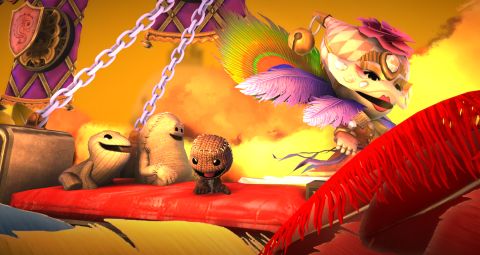 Beautiful, creative and filled with knitted joy, LittleBigPlanet 3 does however disappoint in its Adventure mode’s comparatively sparse content. Nonetheless, it hands over an impressive array of exceptional design tools for budding creators.

Being welcomed back to the world of LittleBigPlanet 3 by the dulcet tones of Stephen Fry is a little bit like sinking into a warm bath of - probably Earl Grey scented - PlayStation charm. And there it is already. The offensive ‘c’ word. Well at least now it’s out of the way, I can get on with more important words. Ones that explain why LittleBigPlanet 3 might look sweet on the surface but hides a fiendish depth of collectables and the frankly terrifying prospect that, thanks to its Create options, you might never need to buy another platforming game ever again. Taking over from Media Molecule, Sumo Digital had a daunting task in knitting a follow-up worthy of the two behemoths that came before. However it’s done an admirable job of bringing new features into the mix, if turning up a little short on its adventure mode.

Sackboy is well and truly back. Before I even get onto his friends, the tiny customisable hessian creature has a brand new set of moves that add considerably to his skillset. A bombardment of tools hits you in Adventure mode - from the interestingly named Pumpinator to the frankly cheaty Boost Boots - and clambering up walls like a knitted Spiderman not only hits you like a cute offensive between the eyes but adds another layer to already inventive platforming. And what platforming.

Never less than visually exceptional on PS4 - whether you are launching your customised sack onto shining salmon slices sliding through the gullet of a giant beast (say that three times), hurtling down waterfalls of lurid pink strawberry milkshake at a drive-in, or expertly stealthing behind giant pop-up playing cards - LBP’s pre-built levels have rarely been this captivating. Textures pop off the screen brightly and you’ll even catch a glimpse of the gentle fuzz around the characters, as though they’ve been in a pocket that bit too long. Add in a perfectly selected soundtrack and there are levels in Adventure mode that will have your face looking a little too much like a Sony press image for your liking. An early level set in space is so well scored that it buries the needle on the music-induced giddiness meter.

Previously his Sackness’ blend of platforming has always felt a little floaty, especially when it comes to the three planes that the game is so fond of letting you jump between. LBP3 hasn’t quite managed to erase the problem entirely, but has opened up levels dramatically with the addition of bouncing pads to let you leap between layers, and slides to hurtle quickly from the front of the screen to the back. When combined with Velociporters for reaching Portal levels of physics-joy, LBP movement reaches a new state of frantic energy.

The possibilities offered by new characters Odd Sock, Toggle and Swoop are enjoyably varied. Toggle is especially exciting as in big form he can smash through panels and walk underwater while Little Toggle will leap out of H20 like a rocket if you change size before hurtling across the surface like a pond skater. Odd Sock makes wall running look easy and while Swoop’s graceful sky acrobatics take the longest to get used to, it makes for edge of your seat platforming as you fly just out of danger.

Rather than bury your Sackperson in endless new abilities, the smart choice was to add friends with these exact benefits. Step in the equally adorable Odd Sock, Toggle and Swoop. Odd Sock hurtles through levels at twice the speed, with wall-running and jumping as standard. Toggle adds a ‘science is fun’ physics element to proceedings with his, err, seamless switches between Big Toggle and Little Toggle. Swoop gives you wings. Refreshingly, all the characters feel truly different and there is a real confidence in their movement and design that’s satisfying to experience.

It’s here where LBP3 is slightly disappointing though. Those expecting a long campaign with the four friends won’t find one here, and instead will have to look to the creation community for worlds designed for co-op play. Adventure mode strictly prohibits the interaction of Sackboy and co., and prefers to steer away from the Lego games’ brand of anarchic team co-op. Switching between knitted characters is only available at dedicated portals - which are of course available in Create mode - but there is a distinct lack of the teamwork element that initial previews suggested, and Adventure mode suffers for it.

Also while exceptionally rich on your first playthrough, the adventure is surprisingly short. Over before you know it, despite some difficulty bumps and some badly placed checkpointing in its final levels, this is a campaign dwarfed by previous titles and can’t be much longer than 7 or 8 hours. Start exploring its three level hubs and there are a number of extra surprises to be found but it’s not the behemoth of previous games and the hubs quickly lose their charm as you hunt for offline things to do.

There are hidden quests on snowy peaks, specially designed 2 player co-op missions hidden in swamps and a new set of puzzles known as Contraption Challenges but this is clearly a game focused on its Create mode. Add in the fact that there a ‘More stories’ link takes you to a currently empty PSN store page, and it seems that while there may well be more adventuring on the way, it’ll probably come with a price. An unfortunate discovery for those who remember Sackboy’s bigger adventures of old.

The flipside of this, of course, is that the slimmer content of Adventure mode points even harder at the potential to be had in the community sector. Building and then racing vehicles across a variety of tracks in the Contraption Challenges, or playing a level top-down as a Yeti and riding airflows, you can see the edges of future marvels that can be achieved in Create Mode. New additions such as the Organisertron look like they’ve just arrived to track your quests through Adventure, but in the hands of amateur designers these will be an essential narrative tool that will let players jump between entire worlds of other people’s imaginations.

A new quest system known as the Organisertron is ready to track progress through the story. It can even show quests on the map so you know where to go next.

Blink (ball) or you’ll miss it

One of Sackboy’s new favourite toys, this impressive teleport device sees you firing balls through nasty obstacles such as lasers only to appear unscathed through the swirling portal.

The Hook Hat does exactly what it says on the tin and let’s Sackboy attach to handy skylines to hurtle through levels even faster than usual.

Velociporters mean you can play and design levels with GLADoS like professionalism. Physics is on your side too. Drop from a height and that’s how far you’ll travel.

The Blaster Handle tool in create mode allows you to put whatever power ups or collectables you want into the hands of Sackboy himself.

Making sure you make the most of Sackboy’s toolset in your levels you can personalise the Sack Pocket with toys such as Boost Boots and the Illuminator.

Blow off some steam

The Pumpinator means you can suck and blow obstacles in your way with L1 and R1 respectively to your knitted heart’s desire.

Previously, Create mode has always been slightly inaccessible and daunting. Hundreds of tutorials sitting away on a distant moon, like an overwhelming mass of knowledge just out of reach. Clearly having a bigger focus on user-developed content than before, LBP3 attempts to fix that problem with a series of well designed ‘Popit Puzzles’. Led by none other than Larry Da Vinci, these do an excellent job of taking you from the very basics of using your Popit cursor with the left stick to experimenting with dangerous gasses and manipulating gravity, all without you really feeling like you are being taught.

The Popit menu is intuitive and simple, but it does take a while to get used to its seemingly endless screeds of tools and materials. Gadgets such as the new interactive Live Stream option - where you can have viewers interact with the action on screen - are of course impressive, but there will be relatively few people who make the most of its incredible abilities.

New toys such as the Illuminator and the Pumpinator make for even more interactive objects, as you place light activated switches and materials that can be manipulated by Sackboy’s new tools. Add in the additional characters and their abilities, and suddenly Create mode goes from being impressive to positively meteoric. They might appear in a whimsical brightly coloured box on a string from the hand of a small sack character and then be discussed by a mop wearing specs, but these are serious tools that allow full 3D level creation and the minute tweaking of seemingly infinite variables. With 9 million levels currently in existence, the already active LBP community should explode when handed these endless new levels of creativity.

It’s easy to see how much platforming potential LBP3 has for the future, but a shame it doesn’t let us to sample as much pre-built, dev-designed content as the previous games. It hands over a staggering level of creative power for the new generation, undeniably, but it’ll ultimately be what we do with it that counts.

Beautiful, creative and filled with knitted joy, LittleBigPlanet 3 does however disappoint in its Adventure mode’s comparatively sparse content. Nonetheless, it hands over an impressive array of exceptional design tools for budding creators.

GR+ news lead Louise is a fan of all things Bat and Assassin shaped. She can often be found watching horror, drinking coffee and beating you at The Binding Of Isaac: Rebirth.
See comments