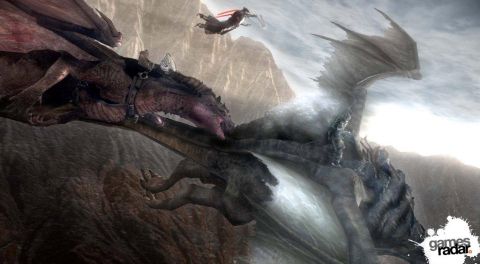 We've been looking forward to Lair for more than a year. Originally slated to be one of the crown jewels of the PS3's launch lineup, it was delayed repeatedly so that Factor 5 - the developer behind the legendary Star Wars: Rogue Squadron series - could finish it properly. Even now, this dragon-combat sim is one of the prettiest games on the PS3, sporting vast battlefields filled with dozens of airborne monsters and hundreds of armored ground troops at once. But after playing it from start to finish, we're left with one burning question: how the hell did Lair go so wrong?

It's not just the developer's decision to force players to use the Sixaxis pad's motion-sensitive controls that hamstrings Lair, although that doesn't help. It's awkward, but given time and a little practice, guiding your dragon around by tilting the controller is almost as natural as using analog sticks (although never quite as comfortable or precise). No, the real problem with Lair is that, underneath its slick visuals and novel controls, the game is shallow, dull and frustrating for all the wrong reasons.

Lair's gameplay isn't particularly challenging, especially not at first. As a dragon-riding knight flying a fire-breathing lizard into a war between two medieval nations, you'll find that your enemies - whether they're other dragons, war machines, hulking land-beasts or entire battalions of infantry - tend to go down with just one or two heat-seeking fireballs from your dragon's maw. Most levels are very linear and clear-cut, nearly all of your objectives are of the "destroy that thing" or "protect that other thing" varieties, and you'll rarely be faced with more than one task at a time. In fact, for the first few levels, the game is just you following orders as they're barked out by your commander - kill those dragons, swoop down and stomp a few platoons of enemy infantry, blow up their warships, yada yada yada.

To be fair, there's some variety here; sometimes you'll have to destroy things by grabbing on and vigorously shaking the Sixaxis until they explode/die (which can be murder on your forearms) instead of shooting them with fireballs. Other times, you'll get to pull up alongside other dragons and bash them out of the sky, or perform a "Takedown" move that forces you to jerk the controller around on cue for a dramatic, leaping-from-dragon-to-dragon fatality. You can even lock an enemy dragon into a face-to-face duel, which turns the game into a button-mashing fighter for a few seconds as you claw, bite and breathe fire at each other. But that's about the extent of what you'll do.