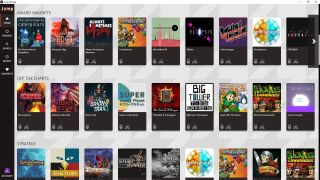 “Netflix, but for games.” If that sounds like a great idea, that’s because it is, but it’s an idea that has still yet to find firm footing in reality, despite the best efforts of several industry titans. Problems of cost, concept and consumer concerns have all been factors squashing the relative impact of projects like PS Now and Xbox Game Pass, suggesting that the journey to a fully accessible, affordable and attractive video game subscription service isn’t going to be as easy as once presumed.

The subscription model has had its fair share of growing pains in these crucial early stages, then, but Jump - an indie-focused application now available on PC (newbies can sign up for a free 14 day trial before paying a dime) - could well mark the positive turnaround that this floundering market has sorely needed.

To fully appreciate Jump requires an understanding of the backdrop to which it finds itself in. PlayStation Now, with its elite requirements for exceptionally fast internet speeds, never really took off as well as Sony had hoped, with the service already terminated across all of its consoles outside of the PS4 and PC. The Xbox Game Pass, which launched earlier this year, offered a much more user-friendly experience, but it hasn’t gained much traction since, with industry analysts already pouring cold water over its profitability. As for PC, some attractive services like Utomik are in existence, but they've yet to overtake Steam as the dominant mode of games commerce online.

Making it worth the jump

Even through their successes and stumbles, however, the existence of these services is nevertheless a reflection of the increasingly digitalized nature of the way we buy and consume our entertainment, and how that change is manifesting itself in the games industry. With applications like Netflix and Spotify now standard software for any modern home, it’s almost inevitable that similar consumer services for video games would eventually begin to germinate. The problem, however, is that video games are much larger in size and more expensive in retail cost than your average Marvel movie or Taylor Swift track, meaning it's not as easy to present the slogan-friendly promise of “instant, unlimited access for an affordable fee” without any strings attached.

This is where Jump comes in, which looks to solve many of the problems which have been holding back the digital gaming subscription model in recent years. It’s $9.99 per month for 60+ titles on PC, with a focus on indie-games of all genres and categories (personal standouts include Teslagrad, Pony Island, and She Remembered Caterpillars, among many others). For some, especially indie fans, this might already sound attractive enough to warrant enlisting, but Jump’s ace in the hole goes beyond the face value of its content.

Using what’s called its “Hyperjump technology”, the Jump PC app allows users to select any game in its catalogue and, as if by magic, almost immediately begin playing it. It’s the “best of both worlds” advantage for a subscription model, boasting all the immediacy of streaming without any of the latency lag and the smooth performance of a fully downloaded title without the extended installation times. Jump promises that “most games will load in under 60 seconds [even] on a 15mbps connection” and, during my time spent testing out the application, I was impressed to find that it hadn’t been exaggerating.

“The user experience is everything for subscription services,” explains Jump CEO Anthony Palma. “It's great to see major companies validating the idea, but to us, the concept of ‘Netflix for Games’ entails four things: unlimited access, high quality without streaming or permanent downloads, multiplatform access across various devices, and a business model that works for both gamers and game developers. Other services we've seen hit on one of two of these points, but none hit on all four.”

That business model that Palma refers to represents another one of Jump’s revolutionary ideas, and something that will warm the hearts of anyone with a fondness for giving indie games their due. Instead of receiving a flat royalty fee, developers will get paid in proportion to how much time Jump’s users spend playing their game. This, in theory, also allows Jump to manage curation more effectively by, say, taking a look at which titles in its catalogue could use a little more TLC when it comes to promotion.

You might presume the focus on indie games is a necessary limitation for Jump’s technology. After all, these are coincidentally the kind of titles that don’t require too much computational horsepower, allowing the Hyperjump software to work its magic without any sacrifice to speed or performance. Palma, however, insists that this isn’t the case. “We will always feature indie games front and center on Jump because we believe this is where a lot of content innovation is happening in the industry. What I can say for now is, our HyperJump technology doesn't limit us to just indie games, so Jump will be able to host all sorts of titles - old to new, and small to large.”

While it’s hard to imagine a big budget, graphically superior title up and running in under sixty seconds on the platform, perhaps the mid-tier market is a viable area for Jump to expand to in future, especially as these types of games could use just as much appreciation as those found in the indie scene. Virtual reality support for the HTC Vive and Rift is also in the works for the platform, representing yet another promising area for Jump to (ahem) jump in on. Nevertheless, Palma promises that users can “expect more announcements surrounding content and device support as Jump grows”, and the team plan to add new games to the platform every month from here on out.

While its games might not be as immediately tempting as the Bioshocks and Borderlands of more prominent subscription services, it’s the impressive technology and consumer-first focus of Jump that really appeals to my sensibilities as a PC owner. For the indie gamer, in particular, it’s a dream come true. Jump’s curation philosophy is to shine a spotlight on the hidden gems you never knew about and, while that’s amazing, it also makes it an acquired taste, but a taste that’s well worth its reasonable monthly fee. Considering recent history, it’s hard to say for certain how Jump will fare out on the market, but Palma remains optimistic - this is a project that’s been years in the making.

“We saw the tech trends forming the basis for what could power a multiplatform game subscription service back in 2015 and we've timed and built our technology platform that powers Jump very carefully since then to create the ideal experience for gamers.” he says. ”That's what our goal with Jump always has been.”