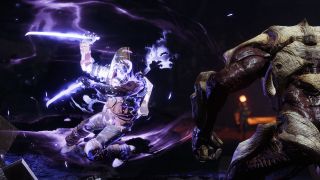 The latest This Week At Bungie blog post finally addresses Destiny 2's flagging performance on PS4 and Xbox One. "We've been bringing new content, bug fixes, and patches at a cadence more frequent than we had previously accounted for," engineer Ben Thompson said. "That cadence of patching has translated into some unexpected overhead within the code that is responsible for loading data into the game."

Thompson said Bungie is looking into startup times, destination loading times, and inventory loading times on console. Improvements to destination and activity load times are said to be coming in the Season 5 update. For example, the wait to load into the EDZ "should be reduced from over two minutes down to just over one minute." However, it's unclear when inventory load times will be addressed.

An incoming update will also improve Spectral Blades, one of the worst supers in all of Destiny 2: Forsaken. The unfortunate Hunter super has been ignored by most players due to its pitiful duration and inaccurate attacks (plus the fact that it isn't Blade Barrage). Fortunately, Bungie says it's being buffed in virtually every respect. Planned changes include:

Spectral Blades isn't the only super being tuned, either. Chaos Reach will also receive a fix for its early deactivation ability, which until now has been basically useless. In the future, "it will be more punishing to deactivate the Chaos Reach super extremely early, but less punishing when deactivating later in the super," sandbox designer Claude Jerome said.

These supers were undeniably in need of a boost, but some less popular balance changes have cropped up elsewhere. In a Reddit post, community manager dmg04 announced that, after weeks of tinkering with the Oathkeeper Hunter Exotic gauntlets in an attempt to fix its weak secondary ability, Bungie is removing the "bows charge faster" ability from the gauntlets entirely. It'll still provide the imperceptibly small charge boost that it's always had, but it "will no longer be called out as an aspect of the Exotic perk."

In a previous blog post, Bungie said it will be "investigating an issue where bow-draw speed benefits granted by the Oathkeeper Exotic Hunter arms armor are not performing as expected." Evidently that investigation didn't bear fruit, so Bungie is ditching the perk altogether. Which is a shame, because if nothing else is done, Oathkeeper will forever be ignored as a useless Exotic, seeing as how its main ability of unlimited draw time isn't worth sacrificing an Exotic slot.

Happily, two other under-powered Exotics were buffed to reasonable levels in a previous update which is also chock-full of quality-of-life changes.