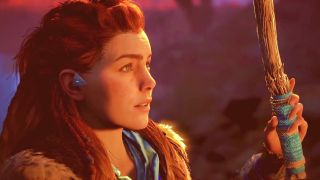 What if instead of fighting with your bow, spear, and wits in Horizon: Zero Dawn… you just shot all the robot dinosaurs with a machine gun? That's how the earliest prototypes for Horizon played out, managing director Hermen Hulst explained in a conversation with Uncharted 4 co-director Neil Druckmann. You can watch the whole thing - taped only a little creepily by Sony - below, but read on to see how gun-toting Aloy first came into being.

Hulst says the "top-line pitch" of Horizon was very similar to the final product: a beautiful world populated with robot dinosaurs and a red-haired protagonist. Mechanically speaking, the idea changed a lot since then.

"When you look at the core combat for instance, the very first prototype we did had Killzone M82 guns in it, and you were actually firing your machine gun at these robotic dinosaurs," Hulst said. "And that very quickly felt weird. That's what we had, right? You start with the mechanics that you have."

This is the gun that Hulst is talking about, being wielded by a shouty Killzone man.

"Just conceptually to be making that much noise in a beautiful forest, that was wrong," Hulst explained. "That was one of those moments where we realized, you know what? We actually need to reduce not just the tribes' cultures in this world, the people that live in this world, back to kind of the bronze age, but [also] the weaponry comes from that. You really can only have access to spears and slingshots, and bow and arrow, and traps and things like that. It was a big moment."

And that's how, despite Guerrilla Games' longstanding love of semi-fictional firearms, Aloy ended up an archer. I think we can all agree that it was for the best… and also that Guerrilla should definitely make some non-canonical DLC where Aloy finds a crashed ship full of Killzone guns and becomes the queen of hot leaden death.