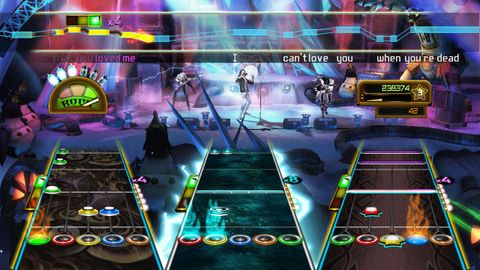 The Guitar Hero series has usually had a stellar track list – seriously, how many people would be willing to shred out to a ridiculous looking plastic guitar if the tunes were lame? So on one hand, it makes sense for publisher Activision to release this compilation, which collects 48 songs from five previous Guitar Hero titles (Guitar Heroes 1 through 3 as well as Rocks the ‘80s and Aerosmith). What doesn’t exactly make sense is the fact that this costs $40 on PS2, $50 on Wii and $60 on 360/PS3, where the tracks could have just been released as downloadable content.

The good news is that everything is done using the original master tracks - even the GH 1 songs, which were covers the first time around. Everything has full parts for all four instruments, including Expert+ drum parts for those with two kick drum pedals – that could make it worthwhile for PS2 players who already have all the previous games and might pass on it otherwise. Finally, the star power and rock meters are located on the sides of the note ramps just like they were in Guitar Hero Metallica. Which is where they should have been all along.

Career mode revolves around your band playing at the various wonders of the world, which has given the development team a reason to include unusual settings such as the Brazilian rainforest and the Grand Canyon. There are unlockable costumes to match these settings as well.

But ultimately, this expansion will live or die based upon its song selection. Which is:

Guitar Hero: Aerosmith
•Aerosmith - “Back In The Saddle”

Sound good? Then you’ll be in heaven with this new pack, especially if you bought Guitar Hero Metallica and have the dual bass pedals going. If these seem a little tired to you or you don’t want to pay for the whole collection, maybe just hold off and see if these make their way into the online shop eventually.