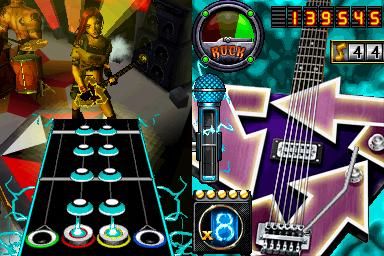 There%26rsquo;s just no other way to slice it: we tried holding it several different ways, but the most comfortable position to hold the DS when playing Guitar Hero On Tour: Decades is totally diagonal. Most any other way, you%26rsquo;ll get cramps from holding your wrist at a cockeyed angle. But diagonally, you can hold your arm and wrist straight as you attempt to tap the four colored buttons of the goofy %26ldquo;guitar%26rdquo; attachment, and still strum the of your pretend guitar strings more or less horizontally on the touch screen.

There is of course one big problem with this arrangement: it makes following the gems streaming down the other screen %26ndash; i.e. playing the game %26ndash; a total bitch. Especially when the touch screen you%26rsquo;re trying to strum is, for lack of a better term, touchy. You have to swipe exactly on the guitar%26rsquo;s strings or it won%26rsquo;t count. And since you%26rsquo;re primarily watching the left screen where all the notes are streaming down instead of the right screen where you%26rsquo;re strumming, this can be a real pain.

Then again, we should be used to this because we dealt with the same problems in the first DS Guitar Hero On Tour, released only months ago this past July. In fact, the games are basically identical in every way. The two controller attachments both work with both games (although thankfully this later model seems to slip out in the middle of a song less frequently). You%26rsquo;ve got 28 songs, mostly good stuff, and the usual selection of characters and guitars and costumes to unlock across arcade and three career modes (up from just one last year): Lead Guitar, Bass/Rhythm Guitar, and the head-to-head focused Guitar Duel.

The wireless head to head mode will let you duel anyone who has this or the original Guitar Hero On Tour, which is nice but not so great that we don%26rsquo;t feel obligated to point out the commercial for this is laughably dumb. Just for the record: No two people who look like this have ever hooked up in a caf%26eacute; because they were both playing Guitar Hero on a DS. Ever.

So there you have it: Just like last time, this looks like Guitar Hero, sounds like Guitar Hero, and you can carry it around without random strangers asking %26ldquo;Why are you hauling around a toy guitar? Oh, you still live with your mom, don%26rsquo;t you?%26rdquo; But it still doesn%26rsquo;t quite play like Guitar Hero. The touch detection is too spotty, the custom controller is too uncomfortable and that intoxicating illusion that you%26rsquo;re actually playing an instrument still isn%26rsquo;t there. But, if you need a portable way to get your rock on, this is remains the best way to go.