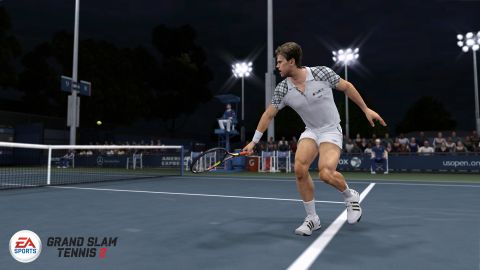 Rockman McAwesome is confused. He spent his rookie season destroying everyone who stood in his path on the way to an unprecedented Grand Slam, dispatching legends with ease. Yet he’s being summarily crushed when venturing into ad-hoc online tournaments against supposedly similar competition, even though his attributes in that arena are vastly superior. It’s enough to make a long-haired, sunglasses-at-night-wearing American tennis pro baffled.

Therein lies the conundrum that is Grand Slam Tennis 2, EA’s first current-generation venture onto the tennis court. Depending on your point of view – or, more importantly, your mode of playing – it’s either an addictive tour de force or a colossal waste of time.

How can that be possible?

Easy. If you’re looking for terrific multiplayer (online or offline), Grand Slam is potentially your ideal tennis game. With innovative controls, all four major event locations and surface types, a deep character creator, and decent selection of top players, it features a unique brand of options for you to head online and engage in epic tennis battles. Thanks to well-implemented systems, you can instantly jump into online tournaments against multitudes of players; if you’re looking for straight-up head-to-head matches, they’re easy to find too. All your key stats are tracked individually as well as in the Battle of the Nations, and you’ll get a special sense of accomplishment when you’re able to beat a real-life titan like Rafael Nadal or Novak Djokovic with your own version of McAwesome.

On the other hand, if you’re looking for a spectacular single-player experience, Grand Slam isn’t the place to find it. The career mode could have been tremendous but winds up mostly strange. For starters, it’s virtually impossible not to win all four major tournaments your first season. The difficulty is set so low that you’ll demolish everyone you see, even legendary heroes of the court like Bjorn Borg and John McEnroe who don’t seem to understand how to react to a simple net rush and volley. While it may make sense to take it easy on someone their first go-round, having us eligible to enter – then easily win – all of tennis’ crown jewel tournaments right off the bat feels utterly implausible.

Yes, the difficulty ramps up in later years, and what was once easy becomes challenging. However, there’s no magic in battling Roger Federer in a 5-set match in the Wimbledon Quarterfinals when you’ve already won the tournament twice before. Even with all the great design decisions – a streamlined calendar with clear direction and simple-to-understand goals, for example – we couldn’t come up with a reason to keep slogging away with no real goal in sight.

The benefit of the easy-as-pie first year in Career mode is that you pile up points that can be used to quickly buff up your created characters, who you then take into the online realm Grand Slam has to offer. Even better, because each player starts off with a fundamental design (baseline player, net specialist, etc.), you can’t completely maximize each attribute. They’re never going to be perfect, and you may always run into someone whose strengths aren’t a great matchup. At that point, Grand Slam matches become their best. Whoever has mastered the controls will wind up victorious.

Said controls dominate any discussion of Grand Slam, which took a page from Fight Night (literally) and transformed the right stick into your racquet via Total Racquet Control. It’s easy to pick up and play but tough to master. The basics are straightforward – flat, topspin, and slices are all executed with variations of stick flicks – but getting strong velocity and direction takes practice. The default settings will let you know how well you’ve timed your shot, but when it comes to angles you’re on your own. Clearly people have figured it out (all you have to do is venture online to see how well the experts can crush serves and smashes with seeming ease) but only a dozen hours did we start to really “get it.”

For those looking for the more traditional button approach, they’re still there. While they’re easier to use, our experience is they don’t offer quite as much opportunity for shot-making. The PS3 also features Move controls, an interesting combo that allows greater control of the shot speed and angle while leaving all player movement to the CPU. The latter probably explains why the Move controls are so popular online, because it takes away one crucial aspect of the game that can prove fatal – poor positioning. We definitely enjoyed using Move, but after rubbing IcyHot to our sore shoulder after a few intense matches, we ultimately settled on Total Racquet Control as our go-to mechanic.

The biggest wild card in the mix is the superb Grand Slam Classics mode, which puts you in the middle of some terrific matches of the past and lets you try to recreate – or rewrite – history. It’s where the best of Grand Slam shines, from the signature styles (and grunts) of stars like the Williams sisters and Andy Roddick to the brilliance of being inserted into iconic locales at the height of competition. It’s also played at a high level, which can be jarring if you’re coming into fresh off of the non-competitive environment of Career mode.

Presentation-wise, Grand Slam is terribly inconsistent. While the player faces and animations are often quite good, the surrounding judges, ballboys, and crown are muted at best and statues at worst. Load times are painfully slow. The crowd noise is OK, reacting fairly well to the action most of the time, but the commentary from Pat Cash and John McEnroe is painfully repetitive from the start. We would have also preferred a much more extravagant celebration upon winning tournaments, both at the moment the winner is struck (instead of waiting for a cutscene) and in the ceremony itself (a 5-second clip of you holding a trophy). At this stage of the console cycle, we were hoping for a slicker overall package.

Ultimately, your love or hate of Grand Slam Tennis 2 will depend solely on who you are. Planning on spending time online? Spend some hours in Career mode and a few more on the practice court and you’re on your way to greatness. Staying offline? Unless you’re happy with a tragically uneven Career mode, you’re better off perusing other options for the virtual tennis court. We know one thing - Rockman McAwesome is going to keep on going until he’s confused no more.