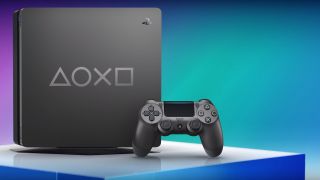 Although E3 2019 is over, the Days of Play sale that went along with it isn’t done yet. Fancy a limited edition console? You can get your hands on the rather handsome Days of Play PS4 for just £223 via eBay if you use the code PURE20. This one-of-a-kind system’s RRP is £280, making that a price-cut of £53. Which isn’t to be sniffed at - it’s a good idea to save as many pennies as possible for the Amazon Prime Day game deals coming our way next month. You’d best hurry, though. This bargain isn’t likely to last long.

1TB Days of Play PS4 Slim | £223 (with promo code) on eBay
Get a unique PS4 Slim for less thanks to the promo code PURE20. Don’t hang about - it’ll get snapped up quick. View Deal

And it’s not the only offer you should check out. Because this is a site-wide sale by AO.com, you can apply that promo code to anything so long as you spend upwards of £25. Take the Red Dead Redemption 2 PS4 Pro bundle, for instance. It normally costs £350, but you could get the 4K system for £280 instead (making it one of the most eye-catching PS4 Pro deals we’ve seen for a while). Similarly, you could grab the best Nintendo Switch bundle around right now for a greatly reduced £295. You’ll get the console, Mario Kart 8 Deluxe, and The Legend of Zelda: Breath of the Wild for a good £75 less than normal, and we don’t expect to see a better saving until Amazon Prime Day game deals roll around in July. But remember, you must use the code PURE20 to get that discount.

1TB PS4 Pro + Red Dead Redemption 2| £280 (with promo code) on eBay
If you want a 4K-capable PS4 with one of its best games, grab this bundle with the promo code PURE20.View Deal

Nintendo Switch (Neon Blue/Neon Red) + The Legend of Zelda: Breath of the Wild + Mario Kart 8 Deluxe | £295 (with promo code) on eBay
How about Nintendo's console instead? Simply use the promo code PURE20 to get it for a whole lot less. View Deal