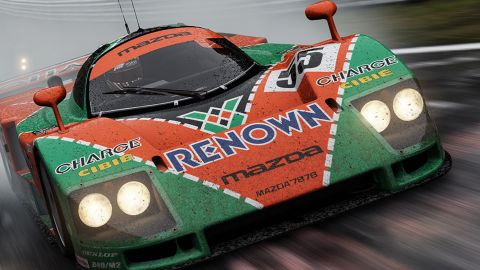 This is a true showcase for Xbox One in every area except the racing. Inconsistent difficulty, random payouts and way too many dull events seriously spoil the party.

You can either look at Forza 6 as a 'driving game' or a 'racing game'. And, despite phenomenal quality (and I do mean phenomenal) throughout most of its production, it doesn't offer anywhere near the best driving experience available on console. As a racing game? I simply wouldn't call it that. I've been playing it all week and I've had one great race. One. Obviously, that is a problem.

Let's look at the driving first, since that’s what you spend your time doing. In the very fastest cars, it's exhilarating like few other games. The sensation of being at 200mph in an F1 car is properly scary. It's almost violent when you accelerate out of a corner, there's so much power under your finger. I've seen videos of people trying real F1 cars on track days, and this is just like that. Far more power than most people could possibly handle.

But the game isn't about that kind of driving for 90% of the time. Sporadic showcase events may let you try some more exotic cars early on but, for the most part, career mode is slow and boring. There are 5 main 'volumes' of race types, ranging from pootling road cars and nostalgia-laden classics to snarling beasts and V8 Supercars. You spend most of your time in sedate, joyless races, going through the motions of driving and hitting rewind when you fail. Forza 6 is actually much more engaging when you disable rewind - where's the fun in do-or-die manoeuvres if it's really just 'do or mulligan'?

Many cars feel like they have beach balls for tyres and driving lap after lap at a proverbial snail's pace is incredibly dull. The idea of racing SUVs around Spa in the dead of night with only the cars' headlights to illuminate the track is fundamentally exciting. I would love to do that for real. In the game? It's mind-numbingly boring. Slow, floaty and sedate, it's simply not fun.

I took part in a pre-release multiplayer session, with impressively full grids of 24 cars. Sadly, 24-car multiplayer is absolute carnage and again, different car models unbalance the action. The new League mode looks promising, especially as collisions are switched off in the first tier, but it'll only be in post-release that we see how that really works.

Naturally, the first thing I did was play on Sim settings, like I normally do. However, the 'raw' cars behave very strangely – actually a lot like the motorbikes of MotoGP 15. Yes, that is weird. There is definitely more grip in Forza 6 compared to Forza 5, but that creates some very strange accidents. I somehow managed to roll my car on a straight because it waggled under acceleration, which grew more violent before turning into a spin, which tipped over and barrelled for some 50m. Needless to say, that would never happen in real life. So after a few hours, I grudgingly switched on stability management and things were more manageable.

And so we get to the racing. The problem is simple: The Drivatar system simply doesn't work. Never mind the fact some cars inexplicably tap the brakes on a straight. It doesn't matter which Avatar Difficulty you choose: on some tracks you'll win easily, while on others one or sometimes two cars will simply drive away from everyone else. You'll sometimes catch a glimpse of a dot on the track map, or a speck on the horizon, but you'll never catch them. The hardest difficulty is meant to humble you and it does. But everything below that is alarmingly inconsistent.

As a result, actually getting into a closely-fought, cut-and-thrust race (which is what a racing game needs to be exciting), is incredibly rare. It doesn't help that only special, themed events fill the grid with the same model of car. Most races are uneven in terms of horsepower and grip and it really shows. Fortunately, you only need to get 3rd or higher to progress, but you really should be able to win if you're good enough.

Forza 6 makes Forza 5 look like a demo in terms of event types and track diversity and the first two hours of the game are beautifully-paced, as you're introduced to the controls in a warm-up race, then gradually given full control over assists and difficulty, before the new 'Mods' feature is unveiled.

I really like the Mods. They are given to you as cards in packs of varying price and rarity, and are split into three types. Some cards can be used as many times as you like and give you stat boots like +12% grip or -5% weight, plus extra boosts on certain tracks. Dare cards offer credit rewards for completing race objectives under set circumstances, such as forced cockpit cam, or no assists. Other cards are single-use, like a two grid position starting boost for one race. They're fun to use and I hope the series expands on them in the future.

There is a problem, however. While I absolutely welcome the video game elements and special states these challenges introduce (one card turns off collisions for the entire first lap, letting you drive through the packed field at turn 1), they are somewhat negated by the new spinner system. Every time you level up - which happens every couple of races - you get to spin a randomised spinner with nine possible prizes. None of the rewards totally suck, but there are some huge wins to be had. About an hour into the game, I hit level three and won a Lotus F1 car worth 2,000,000 credits. I also won 1,000,000 credits soon after. So when you're gambling rare cards on the prospect of maybe a 10,000 credit bonus, it feels a bit meaningless. A shame, since the spinner and the Mod cards are both truly great elements. They just don't work together.

The game's biggest new feature is probably wet weather driving – and it's gorgeous. I scoffed at all the hype around the game's puddles, but I take it all back. These are some seriously sexy puddles. They're not dynamic (so they're always in the same place and don't get bigger or dry up), but they behave exactly like real puddles, making your car hydroplane, or dragging it off-line and onto the wet grass, where you're heading straight to the scene of the accident.

Project CARS' weather is better (it's a fully dynamic weather system with rolling clouds and everything) and Driveclub's wet conditions look better, but Forza 6 at least maintains a rock solid 60fps. I haven't seen it drop or tear a single frame anywhere, even when all those hyper-detailed cars are leaving the startline. It's gorgeous.

And oh boy, the cars are really special. They look absolutely stunning, and it's impossible to take a bad photo of them in the returning photo mode. They pick up dents and scrapes and occasionally a spoiler will fall off, but otherwise the damage is visually modest. Impacts do significantly affect handling, however. First you'll find braking is unstable when suspension is bent, but crash hard enough and your vehicle will be seriously crippled. What a shame impacts with other cars lack any kind of violence. In some races, it's often like bars of dry soap rubbing together.

I love everything else about the game. Having real-life Indycar drivers and Hammond / May from – sorry, formerly from – Top Gear introducing classes is wonderful. Warm, engaging and often funny, they add much-needed personality to the action and the result is clearly a AAA package. The car customisation options are predictably amazing (and you should see my pure gold-painted Ferrari F40, which looks so classy it hurts), the circuit selection features hit after hit of real world classics and the sensation of simply travelling forwards is wonderful. On the rare occasions you hit 200mph, it's magnificent.

The speedier, grippier classes like the Grand Touring series really show what the game could have been. But when Formula E became available and the first race was an 8-lap slog around Indianapolis, I wondered where gaming went wrong. I found myself sitting there, stony-faced, maintaining 138mph, in the lead, with no need to brake, and no chance of being passed. The frantic orchestral music and pounding drums reached crescendo after crescendo as I spent ten minutes of my life gently nudging left. Racing games are better than this and we must never forget that.

This is a true showcase for Xbox One in every area except the racing. Inconsistent difficulty, random payouts and way too many dull events seriously spoil the party.