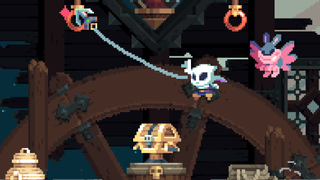 We all do it. In those first few moments when you enter a game and take control of your character, you want to get a feel for what's in store - so instead of pursuing progress straight away, you fidget around in place for a spell. Running back and forth, hopping up and down, coming to terms with the movement physics that will determine your platforming success later on. And when those controls immediately feel just right, it's magical. Flinthook, a pixelated 2D platformer that revolves around the constant use of your trusty grappling hook, delivers that satisfying sensation from the start. With its ingenious grappling mechanic and the satisfying buoyancy of your jumps, simply traversing Flinthook's levels is a joy.

This particular grappling hook is closer to the Ninja Rope of the Worms series, rather than the rigidly directed robo-arm of Bionic Commando. Flicking the left stick to move also projects a little crosshair with 360 degrees of movement, and tapping R2 will cause your anchor-ended Chainhook to zoom out towards your target and pull you towards the rungs placed around each room. Using your hook to dash around interconnected rooms is Flinthook's main draw, and it's wonderfully implemented thanks to a little trick: there's some generous aim-assist guiding your every grapple, so you'll feel like a pro swinging from rung to rung like a chibi Spider-Man.

Our main character Flinthook is cute as a button: a masked space pirate who thieves from other space-faring scallywags, making his entrance by busting through the hull atop a colossal anchor. Levels are procedurally generated a la games like The Binding of Isaac and Rogue Legacy, but there's much more verticality here to emphasize and hone your grappling prowess. The theming is excellent, akin to the galleons from Donkey Kong Country 2 (floating across space rather than the sea), and the visuals pop with gorgeous pixel art that recalls your fondest memories of the 16-bit era. Creating games that look, sound, and feel just like lost '90s gems is the specialty of developer Tribute Games, and everything from the chiptune melodies to the bouncy animations as Flinthook leaps about or simply stands in place feels authentically retro. It's as if Flinthook is a distant cousin to Ristar or Pulseman.

The combat's just as smooth as the platforming, as the Chainhook's crosshair also doubles as the reticle for your plasma pistol. With the two aiming systems aligned, it becomes a cinch to pull off impressive maneuvers, like vaporizing a small flying enemy in a flock so you can thread the needle and grapple through to the other side in the blink of an eye. With just how responsive and intuitive the grappling-and-gunning controls are, you're liable to feel like a trained speedrunner, zipping around the levels with ease (even when you've only been playing for a matter of minutes). And if things get a little too hectic, no worries - Flinthook can also slow down time with a handy gizmo, giving you a few seconds to plan your next move or dodge an incoming attack.

When you're not flying through the air to and fro, all the little details in Flinthook will keep you smiling. The simple act of busting up barrels and boxes strewn around below deck, then swooping around to snag all the coins they scatter, has the same deliriously destructive appeal as smashing row upon row of clay pots for rupees in any Legend of Zelda game. And the big bads you're chasing after for that bounty reward look delightfully goofy, like a husky chicken captain piloting an intimidating mech suit made of fittingly pirate-y chunks of wood and iron. Flinthook will be coming aboard PS4, Xbox One, and PC in early 2017, and the invigorating mobility of grappling hook mechanics will never be the same.

Lucas Sullivan
Lucas likes his games like he likes his music: eclectic. With all the weird and wonderful stuff he's played over the years, the two of you are bound to feel the same way about something!
See comments