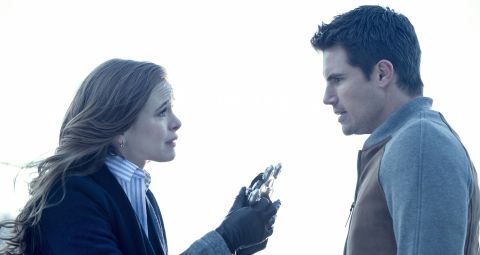 What a bitch! Sorry, yeah, sure, there was some stuff about separating Firestorm and Joe discovering a major revelation about the death of Barry’s mum in the episode too but… what a bitch!

Honestly, Iris in this episode left us reeling to a degree that it was difficult to concentrate on decades-old blood splats and nuclear explosions. Hell, we’re surprised Barry didn’t go into meltdown when he found out what she said to Linda. Barry’s right – she’s acting like a right harridan, first telling Barry she doesn’t want him, then getting all narky when anybody else shows interest. After this, how can any viewer care less if Iris and Barry ever get together? Let’s hope the writers lose interest as well, because there’s now little to be mined out of this particular will-they?/won’t-they?

The shame is that Linda Park appears to have “mini-arc” written all over her. Hopefully we’re wrong in that assumption, as all the Barry/Linda scenes in this episode were charming and fun, from Barry (clearly suffering a bit from “Wow, I’m getting to shag a woman way out of my league” syndrome) acting like a complete goofball to his red hot chilli pepper challenge at the end. Grant Gustin delivers a great gawky geek and often feels like the greatest Peter Parker who never was.

Barry begs Firestorm not to “Flame on”, which is the catchphrase of Marvel’s Human Torch. Is that allowed?

It’s welcome to have a comic-strip show like The Flash where the relationship drama doesn’t feel like a detraction from the main action. Especially when the action is so good. Once again, we have a truly spectacular super-dude slugfest. Clearly, there’s an off-the-peg CG software package for creating flames these days that the FX team on The Flash is taking full advantage of, but they’re adding a level of artistry to the Firestorm effects that make him much more impressive than just another Human Torch rip-off. And the way the fights are shot and cut continues to impress. Is this show ever going to run out of money and be forced into a bottle episode?

The Firestorm plot is developing well and it’s great to finally see Alias’s Victor Garber get to do some proper acting as the guy body-sharing with Ronnie. There’s a nice line in snark to Professor Stein that bodes well for the future, assuming Firestorm will be a recurring character.

The who-killed-Barry’s-mum? arc plot also takes an intriguing step forward, even if it nearly twists it ankle in doing so. If we are to believe Cisco’s analysis, Wells wasn’t the Reverse-Flash present on the night of the murder – intriguing. Joe and Cisco also now know that an adult Barry was there too (which the audience had already worked out). All good stuff, but the methods Joe and Cisco use to unearth this information are at worse magical-science, or, at best, the result of some amazing coincidences.

The idea that the mirror would act like a camera is straining credulity enough. The idea that the cougar who now owns the house would keep the mirror – in exactly the same position – for 15 years (and just paper over some handy blood spatters) stretches credulity even further. And the idea that ten multiple-exposures would look like anything other than a brown, blurry mess leaves credulity mewling on a rack like the victim of the Spanish Inquisition. This is unforgivably silly plotting from a show that usually commands your suspension of disbelief with consummate ease.

It’s a minor gripe, though, and the final scene, promising the return of the wonderfully belligerent General Eiling next week more than compensates for any shortcomings.

Cisco: “Technically it’s a multi-spectrum ultraviolet laser-enhanced scanner that detects molecular schisms in the 600 megavolt range, but I figured super light was easier to say.”

“We’ve got a jumper on 52nd and Waid,” says Joe, providing this episode’s nod to DC’s New 52, while throwing in a reference to The Flash comic scribe too.

Firestorm goes to Concordance Research where he (accidentally) incinerates one of Professor Stein’s old colleagues, Quentin Quayle. Similarly in the comics, Stein works under Quayle at Concordance Research. Oh, and his wife is also called Clarissa, as in the show.

“Are you worried about moving too fast?” Were Barry, Cisco and Caitlin really talking about premature ejaculation?

Barry tells Linda he has tickets for Jazz musician Mal Duncan. Apart from wondering if subjecting a new girlfriend to jazz on a second date is a wise move, we also need to point out that Mal Duncan is a superhero in the DC universe who has had several aliases including Guardian, Herald, Vox and (the possibly apt) Hornblower (depending on what instrument he plays).

Go on, admit it. You were looking at the floor here to see if you could spot the pepper Barry had spat out, but someone has cleaned it up really quickly.

Oh look, they’re having fun with that bizarre Firestorm insignia from the comics again.

The Flash airs on Sky 1 in the UK and the CW in the US on Tuesday nights.