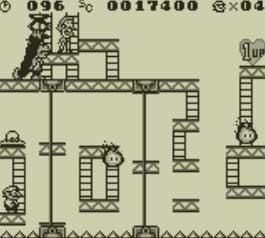 When we first heard the 3DS would offer downloadable Game Boy titles, the first thing thatcame to mindwas this exceptional remake/sequel to the original Donkey Kong. While the first few minutes are a straight up recreation of the iconic opening DK levels, the game quickly escalates into a full-on puzzle platformer. By the end, you’ll have solved 101 levels filled with moving platforms, treacherous pitfalls, vicious enemies and, of course, a tie-wearing, barrel-tossing ape.

Gameplay is a mix of classic Donkey Kong, Donkey Kong Jr and, of all things, Super Mario Bros 2. Each level is cleared by carrying a large key to a locked door (a la Mario 2), but the process of getting to said door unfolds like a ramped-up Donkey Kong, with pulleys, platforms and one-hit kills. Now, if Mario were as feeble as he was in the original DK (where all he could do was hop, and a simple fall would end him), these challenges would be impossible; that’s why Mario’s abilities have been substantially enhanced, making him capable of backflips, handstands and other acrobatic feats that have since been made part of his usual repertoire. His deep well of moves, combined with the increasingly devious puzzle layout, make this one of the tightest, most direct and enjoyable Mario games of all time.

Above: As with most Nintendo-published Game Boy games, the music is worth listening to

The only real downside to this game is that it’s the black and white Game Boy version. As longtime gamers know, Donkey Kong helped launch theSuper Game Boy, a Super NES cart that let you play GB games on your TV, and in doing so tossed a bit of color into the mix. However, certain games (like Donkey Kong) were developed to take specific advantage of the Super Game Boy, benefiting from even more color and occasionally better sound and graphics. From a pure gameplay perspective, the two versions are identical; it just would have been nice to have the option to choose between color or black and white.

For $4.00, this is an absolute must-buy. It may not look like much, but Nintendo squeezed every possible drop of gameplay from this basic idea and stretched it across hours of non-stop fun. Everything just feels right; the jumps, the speed of Mario’s fall, the satisfying crunch of smashing DK in the face… it’s all spot-on. If you love games like N+ and Super Meat Boy, but wish they weren’t so ball-bustlingly difficult, Donkey Kong could be the slower-paced, reasonably challenging answer for you.