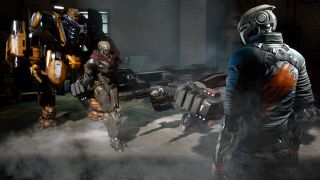 Although it might look like a traditional FPS, Disintegration is far from that. Created by the former Halo co-creator, it could be very interesting indeed. Revealed during Gamescom, V1 Interactive’s Disintegration is a post-apocalyptic sci-fi shooter with an interesting RTS twist. The game is slated for release in 2020, so what better way to ring in the new year than to run through everything we know about the game ahead of its release date. Follow on for the skinny on Disintegration’s gameplay, multiplayer and more.

Disintegration release date - when is it coming out?

V1 Interactive’s Disintegration currently has a vague release window of 2020, specifically in the first quarter of the year. It will launch on PC, PS4 and Xbox One. Nothing has been announced in relation to Google Stadia. The game will be published by Private Division (The Outer Worlds, Ancestors) and was revealed during Gamescom 2019, with a trailer debuting during Opening Night Live.

Disintegration comes from one of the key minds behind Halo

Marcus Lehto is the co-founder of the Seattle based studio V1 Interactive. You may also know Lehto as one of the key developers behind the Halo franchise, working on every Bungie Halo title before 343 took control. He served as Creative Art Director whilst at Bungie, and his initials are even on Master Chief’s boots. How’s that for a legacy! He left in 2012 to found V1 in 2014 after working at Bungie for over a decade.

Disintegration gameplay - how will it play?

In Disintegration the player pilots a Gravcycle, a ship looming over the ground combat below you. From this position, you will input commands for your troupe of robot heroes and direct them towards AI enemies and ensure they survive in the thick of battle. As well as your team you have a set of weapons you can use whilst floating above combat in your ship which you can swap between to deal different kinds of damage at close, medium or long range.

As well as pinging locations for your team to move to you can cast abilities whilst fighting to paint targets, slow clusters of enemies down and cause mayhem on the map. Given the RTS influence Disintegration is all about combining your shooting skills with careful placement of your troops and well-targeted abilities to disrupt battle and forge a path to victory. It’s a mashup of genres with a lot of layers, but the core gameplay is easily understood once you’ve been hands-on for a few matches, if not a touch chaotic.

Disintegration will feature three team-based multiplayer modes where players can pick from a series of gravcycle crews with different abilities and affinities in battle. Each player will control a gravcycle and command their own suite of troops from above, trying to direct their force to capture objectives and carry flags from one end of the map to the other. Crucially, you don’t play as the ground troops, but control them via the gravcycle in the air, which also has mounted weapons.

The abilities in your arsenal will depend on which themed crew you pick. Some let you paint targets to lower an enemy ship’s defence so you can deal more damage, whilst others offer a more typical high firepower build. A clown crow called The Sideshow dabble in sticky grenades. Depending on the flow of battle you can mix and match your crew in between deaths. Of course, you’ll be fighting other players in the air and shooting at their ships as well as opposing crews on the ground. Communication is key to success in Disintegration, especially in the first 5v5 game mode shown off by V1, Retrieval, where you’re tasked with securing an item and taking it to a zone on the map to score points.

Disintegration’s monetization plan includes cosmetic-only microtransactions and no loot boxes, which is a refreshing approach! You can also use projected emojis in-game to communicate with other players on your team.

The Disintegration story is a near-future warning call

Much like Lehto’s previous games, Disintegration will feature a campaign with a contained narrative. Players slip into the shoes of Romer Shoal, a top gravcycle pilot and leader of a ragtag group of outlaws who follow his commands from above. The premise leads that Earth has been ravaged by climate change and an abundance of citizens which has ushered in societal collapse, pushing humanity to near-extinction.

In response, a group of scientists figured out how to cut out the brain of a human and put it into a robotic shell to temporarily solve the supply and demand crisis. That process is known as Integration, and Shoal himself has been integrated, as well as his group of outlaws who are rebelling against the Rayonne, a coalition of integrated humans who want everyone to conform or die. The Rayonne are trying to force every remaining human to integrate and join them, whilst the outlaws seek to liberate themselves from the Integration process, which was initially supposed to be a temporary thing. The campaign will follow Shoal and co as they try to “reboot humanity” and regain their physical bodies, repelling the Rayonne horde in the process.

The Gamescom Disintegration announcement trailer starts out quite strange, following our protagonist Romer caressing his gravcycle, pounding the metal and delivering a cool guy speech before racing out of the garage in his souped-up rig. We get a glimpse of the single player here as Romer leads his crew to a farmhouse which is filled (accordingly) with bullets. The movement looks frenetic and the environments varied. It looks like there’ll be a good bit of banter between the main cast, as a female robot walks in to chastise Romer over his intimate car stroking.

The seven minute multiplayer trailer (courtesy of IGN) is straight out of Gamescom and shows off a number of the crews and how they interface in battle. The maps look tight and claustrophobic, forcing crews into combat and teasing out tactical ability placement and collaboration. Whether this ambitious genre crossover sticks the landing will come out in the wash when the game launches later this year.

Want more new games to get excited about? Here are the upcoming games for 2020 and beyond to add to your watch list.