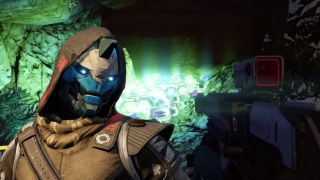 An odd, old glitch that you probably never expected to hear about again helped pave the way to Destiny 2's now-defunct secret XP scaling system. As Bungie developers explained in a podcast discussion published earlier this week, the ghost of the original Destiny's infamous Loot Cave still haunts them all.

First, here's a summation of what all went down from Destiny 2 project lead Mark Noseworthy: "After level 20, we were scaling up or scaling down XP earned based on specific activities that you played. Which makes sense for a bunch of design goals and reasons, that certain activities should be more rewarding than others. But unfortunately, the UI was not reflecting the way it was being scaled. And so it was misrepresenting what was happening. We turned off that scale on the weekend - but then we didn't update the API, so it seemed like we didn't fully turn it off, or there was something else going on behind the hood, and that's getting sorted."

Specifically, Bungie turned off the scale after a Reddit user took a bunch of measurements to finally nail down why their XP gains often felt out of whack. No hard feelings there; Noseworthy said he's "glad that got surfaced," and game director Luke Smith even added that they "should talk to that individual about employment opportunities." But why did Bungie implement that sneaky little system in the first place?

Bungie crafts your Destiny play experience in many more ways than players may realize. The Leviathan Raid, for instance, has "streak protection" to make sure you don't miss out on receiving a certain reward too many times in a row: "These systems are also in place to say, 'You don't need to feel compelled to grind Public Events forever because they're paying out more rewards. Crucible's cool too, you should go over there because it's also gonna pay out," marketing director Erik Osborne explained.

All of these systems are carefully set to ensure players never feel obligated to, say, group up and fire into a cave for hours at a time to receive the most rewards possible.

"The loot cave from Destiny 1 is an interesting example, and I think it has remained in our psyche since it happened," Noseworthy began. "It honestly, I think, wasn't that bad from an economy standpoint. It was not the best way to get Legendaries in the game, or Exotics. If you went and played other activities they would actually pay out better on a reward-per-minute basis.

"But more damaging for us at the time - and this is what's stayed with us - is the PR it generated, and the memes about Destiny. That this un-fun activity reinforced the narrative that Destiny 1 wasn't generous enough, and you were better off firing into a cave than playing these other activities that actually are pretty fun to play. And that narrative was actually true at that point! Destiny wasn't generous enough in a bunch of ways. But the broad meme is just that Destiny is a game that has RPG elements and it's broken. That hurt, you know? And people worked really hard on the game to make a sweet economy and have cool rewards, and there was this exploit. And that sucks.

"That certainly has stayed with us. So if you're building a new system, one of the first things someone is thinking about is, 'Well, how's it gonna be exploited? What if we don't see this, or is there some way this is going to ruin the economy?' And it's just an element you have to consider. But in the same hand, the design's job is not to make a bunch of systems that can't be exploited or never fail - it's to make something's that's balanced, that's fun in the long run, that's rewarding. And that means looking for things that might be exploits, but also overcorrecting for the other side, when you just get unlucky."

Sometimes Bungie doesn't get the math quite right. Rarely does it cross the line from quiet back-end user experience tweaks to actual, if unintentional, deception. The studio has committed to being more open with players, starting with a detailed explanation of Masterwork Weapons and more (non-expansion) content coming in the months ahead and rolling right into that refreshingly frank podcast. Hopefully Bungie will stick to this new approach, and the only rifts in the Destiny community will soon be the kind that Warlocks can summon to heal you.